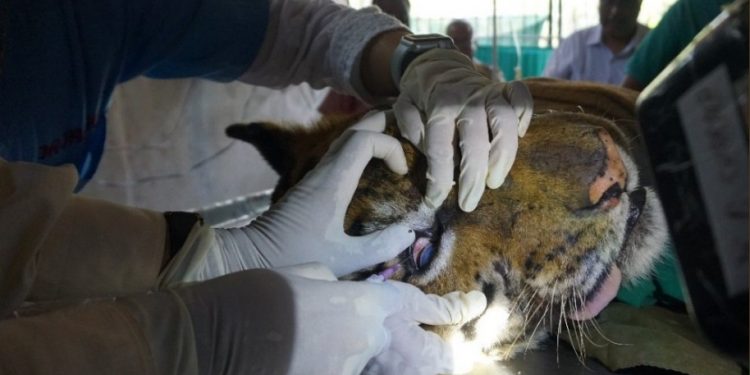 A tigress in Central Assam, which once ruled the jungles with total regality, is now fighting blindness and malnourishment.

The weak and de-hydrated tigress was found injured near the Orang National Park in Sonitpur district on Friday, and was immediately shifted to the state zoo in Guwahati for specialized treatment.

“After the rescue, we found that the tigress had developed blindness and was weak, and had strayed outside the park and was roaming in human dominated landscape,” Tejas Mariswamy, the Divisional Forest Officer of the Assam State Zoo told Northeast Now.

The nails of the tigress had become brittle, eyes had begun to lose vision and she was nearing her death when a team of wildlife activists and forest guards found her, Mariswamy said.

The Indian Forest Service (IFS) official said the ailing tigress is now being treated at a comfortable cage in the zoo and is recovering.

The blindness of the tigress is due to corneal opacity which might have probably happened due to injury to eye, deficiency of vitamins or due to eating some toxic substance while she had strayed out of the park.

“The blindness is, however, curable if not fully, at least partially. Doctors will again monitor her health on May 10 to assess her eye condition,” the DFO said, adding that the tigress had accidentally drifted away from the park.

In addition to the veterinarians in the Assam State Zoo, a team of experts from the College of Veterinary Science are closely monitoring the conditions of the tigress. “The tigress will be released in Orang National Park after improvement in the health conditions,” Mariswamy said.