Purnima has been working in Dadara, Pachariya, Singimari villages in Assam’s Kamrup district for the last 11 years. 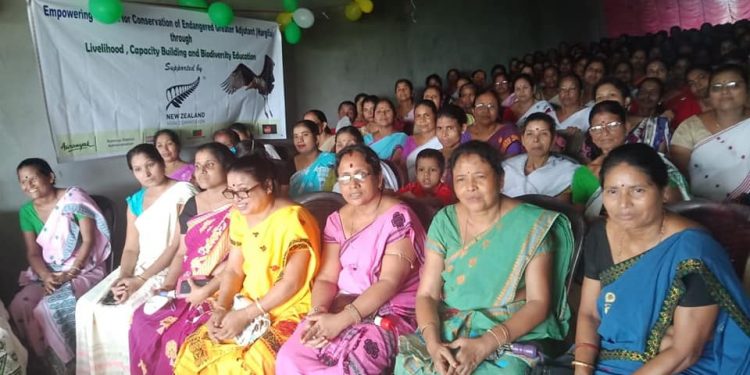 Members of the Hargila Army

The New Zealand High Commissioner met Purnima last year and committed to extend help towards her initiative for protecting the greater adjutant stork which is on the brink of extinction with less than 1200 birds left in the world.

Purnima has been working in Dadara, Pachariya, Singimari villages in Assam’s Kamrup district for the last 11 years.

She has mobilised a group of 200 rural women into a conservation army by giving marginalized women a voice.

On July 16, 2019, with support from New Zealand High Commission, 80 sewing machines were distributed among 200 women.

The New Zealand High Commissioner Joanna Kempkers said, “The New Zealand High Commission is happy to support the project through our Head of Mission Fund. I commend Dr Purnima Barman for the way she has integrated the conservation of the endangered Hargila with the empowerment of local women by offering them a means of livelihood. This month, we will continue our support by providing 200 women with 80 sewing machines. I understand from Purnima that weaving the stork motif on saris, skirts, gamochas and other items has helped to establish a connect with the birds that has boosted conservation effort.”

On January 11, 2019, Purnima had met NZ High commissioner Joanna Kempkers at the latter’s residence and discussed the way forward for Hargila conservation.

She had gifted the much impressed New Zealand High Commissioner with handloom attire woven by the Hargila Army.

Barman works with local communities to increase the number of nesting trees and stop further cutting down of these trees.

The movement has empowered these women by providing them with livelihood, education, awareness training and capacity building.

These women now weave Hargila in their traditional handloom attire which is a matter of pride for them and also a steady source of income.