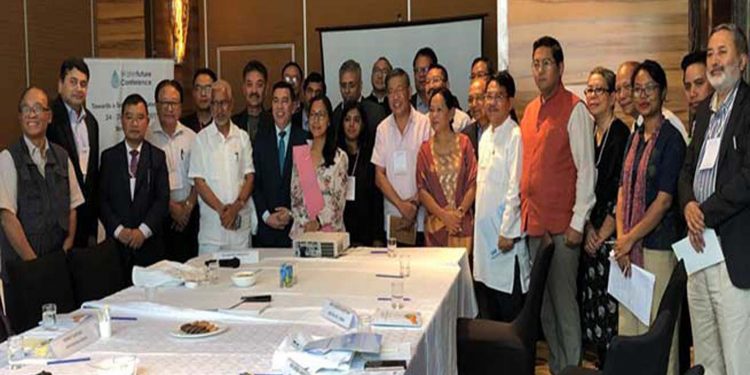 The dialogue at the ongoing ‘Water Future Conference: Towards a Sustainable Water Future’ was organised by the Integrated Mountain Initiative (IMI) and supported by Divecha Centre for Climate Change at the Indian Institute of Science and Indian Himalayas Climate Adaptation Programme (IHCAP).

The high-level round table conference was attended by MPs, MLAs and representatives from Uttarakhand, Ladakh, Sikkim, Arunachal Pradesh, Nagaland, Mizoram and Meghalaya.

The conference was also attended by members of IMI, World Bank, Divecha Centre for Climate Change, United Nations University and officials from national and international institutes of excellence including Future Earth and Global Water Futures.

Two critical areas of melting of glaciers and reviving springs were discussed at length besides the impact of the tourism sector in increasing water stress in the region.

The MP from Tura in Meghalaya and member of the Parliamentary Standing Committee for Water Resources, Agatha Sangma highlighted the rising conflicts due to the scarcity of water in many rain-fed areas.

She urged for reduction in ecological footprints and for polluting companies to take responsibility of the mess they have created.

The discussion highlighted the need for a comprehensive water policy for the states of the Indian Himalayan region and explored areas of strengthening research, action and policy directions.

Acknowledging the need for a sustained, integrated effort to addressing key water issues of the region, a proposal was made to establish a mountain solutions programme which will include a water solutions lab for the region.

The meeting concluded with the chair and former Sikkim parliamentarian PD Rai emphasising the need of more interactive platforms between the scientific community, policymakers and communities to arrive at better solutions in building towards a water-secure future.