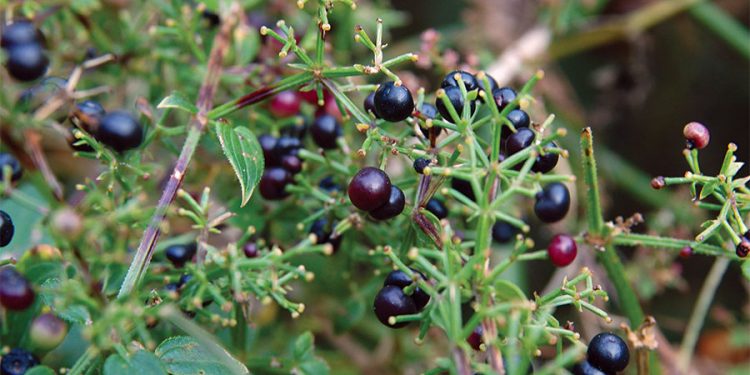 As the spring season sets in and around the Rongali Bihu in the month of mid-April youngsters near 11th Mile village on NH-15 under Bogeenadi Police Station in Lakhimpur district run towards the nearby woods full of Nahar (Mesua ferrera) trees in the morning to collect its flowers that fall overnight.

As the period of three months beginning from late February onwards are the blooming season of Nahar trees, it is not for the young boys and girls to have a happy morning to pick up the fallen Nahar flowers but people of all ages as well, who collect the flowers.

They all sell them to some buyers coming from far away. The flowers collected are sold at Rs 20 per kg to the buyers.

The areas spreading from Kakoi reserve forest to Dulung reserve forest covering villages like 11th Mile, Padumoni, Baghinijan, Ukhomati are known for this trade where large number of Nahar trees are available both in reserve forests and in individually possessed lands.

The flower of this tree is also collected by this same group of buyers from Sri Sri Aniruddhadev Naharati Thaan, near Bihpuria in Lakhimpur district.

The traders then send these flowers, after being dried, in tonnes to buyers outside Assam from Harmutty and Banderdewa areas on Assam-Arunachal Pradesh border fetching prices at the rate of Rs 3,000 per quintal.

The second species of exotic flora sent in large numbers to outside Assam from Lakhimpur is Indian Madder (Lubia  cordifolia), locally called Manjistha or Tamil Lota. Found abundantly in wild in Arunachal Pradesh, this plant is a perennial, prickly or scabrous, climbing herb belonging to rubiaceae family is collected in huge numbers and loaded in trucks at Harmutty and Banderdewa in tonnes to be sent to places like Siliguri, Kolkata and Delhi.

The sellers of this plant also collect them from the forest areas inside Arunachal Pradesh.

Other exotic herbs like Large Cardamom (Bada Elachi), Satmul, Gand Kachu, Arjun, Bos and Silikha are sent in large numbers unnoticed from the two bordering areas to outside Assam.

The exotic flora, all with high medicinal values have been taken out from the area in an unorganized, informal and unauthorized way leaving no scope of any economic development of the local areas.

The collection and sending of these herbs has been operated clandestinely by unknown buyers from outside which raises many questions concerning the trade and its nature.

The collectors, who spoke on condition of anonymity at Harmutty and Banderdewa when contacted, were reluctant to reveal the identity of their buyers from outside the state who use to come stealthily to buy.

In a sense the activities are going on illegally in which other banned forest products are also smuggled out through these consignments.

Large number of banned forest products like Kala Kachu (Paris Polyphylla) and orchids are also supplied by such unscrupulous people along with wild animal body parts and organs. It is learnt that the buyers as far as from Nagaland and Myanmar use to come to Banderdewa to collect Kala Kachu.

The police and forest officials play a complicit role in allowing these suspected activities to flourish along the Assam-Arunachal Pradesh border areas of Lakhimpur district.

The role of pharmaceutical companies making herbal products from the exotic flora found here also fall complicit in this underground trade. Instead of collecting the herbs from these areas openly the pharma companies have been denying the establishment of a promising agricultural or horticultural industry back here.

Instead they are contributing to wildlife trafficking and other illicit activities which also involve child labour. Banned and exotic forest products and flora have been illegally extracted from here by the companies whose names are not known here with the active collaboration by police and forest department.