A view of the workshop on wildlife crimes prevention at the BSF Frontier Headquarter in Guwahati on Saturday. Image credit – Northeast Now

The experts’ call came during a workshop on wildlife crime prevention organised at the BSF Frontier Headquarter in Guwahati on Saturday.

Dr Bibhab Kumar Talukdar, the CEO and secretary-general of Aaranyak, chair of Asian Rhino Specialist Group of the IUCN and Asia Coordinator of International Rhino Foundation, elaborated on wildlife crime scenario in global and local perspectives and its link to the illegal arms trade and insurgency.

He highlighted the importance of India for being one of the 36 biodiversity hotspots in the world.

The region is home to nearly 10,000 plant species, 980 bird species, 300 mammals, one of rarest primates on the earth and 175 reptiles of which 40 are endemic and lots of other species including amphibians and freshwater species.

“Because of its rich in biodiversity, the region needs special attention in terms of resources documentation and conservation,” he said 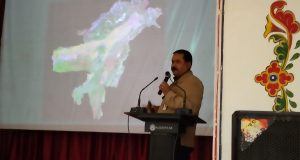 He added that the BSF must wake up to play an important role in the prevention of wildlife trade across the frontiers in close coordination with state police and forest forces.

He raised alarm about the huge money involved in the global illegal wildlife trade that has now attracted direct involvement of hunting of endangered species like tigers and one-horned rhinos by insurgents armed with sophisticated weapons besides organized gangs with global outreach.

Dutta presented pictorial evidence of trained and well-armed NE militants’ involvement in the killing of rhinos in protected areas in Assam including Kaziranga National Park.

He called for strict vigil by the BSF deployed along the key frontiers of the country so that illegal cross-border movement of wildlife parts could be checked.

Over 50 BSF personnel including officers participated in the workshop.

The workshop was organised by the Legal and Advocacy Division (LAD) of Aaranyak, a frontline biodiversity conservation and research organisation based in Northeast India, in association with the BSF Frontier Headquarter in Guwahati.

The officiating Inspector General of the BSF, Guwahati Frontier, KK Gulia stated, “Balanced biodiversity is a must-have for any country and the presentation made by the wildlife conservation experts were an eye-opener as those highlighted how wildlife crimes have become a threat to the national security for its link to illegal trades in weapons and drugs.”