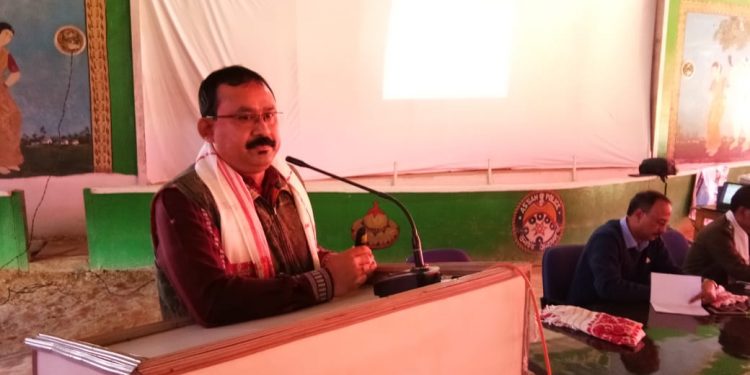 Assam Police was on Thursday exhorted to play a pro-active role in fighting wildlife crimes especially rhino and tiger hunting.

This clarion call was given to around 150 Assam Police personnel at the Police Training College in Dergaon of Assam.

This has been done not only to protect the species but also to deter a grave threat to national security.

Resource persons attending a workshop on wildlife crimes explained how the global illegal wildlife trade is linked to insurgency and clandestine arms trade.

The police personnel were sensitized on how to deal with wildlife crimes.

They were also made aware how violation of environment protection laws are as important as tackling usual crimes and maintain law and order in the society.

The workshop was conducted by the Legal and Advocacy Division of Aaranyak, a frontline biodiversity conservation and research organization.

The workshop was conducted under the aegis of the authority of Assam Police Training College at Dergaon in Assam.

Speaking on the occasion, principal of the training college, Jitmol Doley said, “Protecting nature has to be a passion for the community.”

“We have to revive our dying age-old practices and rituals that were basically aimed at ensuring protection of wildlife and their habitat,” he added.

Dr Bibhab Kumar Talukdar who is the CEO and secretary general of Aaranyak, made a presentation on overall wildlife conservation scenario in global and local perspectives and its link to illegal arms trade and insurgency.

He highlighted importance of India for being one of the 36 bio-diversity hotspots in the world.

“The region is home to nearly 10,000 of plant species, 980 bird species, 300 mammals, one of rarest primate on the earth and 175 reptiles of which 40 are endemic and lots of other species including amphibians and freshwater species,” he added.

“Because of its rich in biodiversity, the region needs special attention in terms of resources documentation and conservation,” he reiterated.

He explained various reasons behind high incidence of rhino hunting in the region and mentioned that the routes of smuggling are identified and report of the same is submitted to CITES to put pressure on those countries where trading in wildlife is still legal.

In a deliberation on illegal wildlife trade, Rahul Datta of International Rhino Foundation (IRF) raised alarm about the international dimension of it.

He presented pictorial evidence trained and well armed militants of the region being involved in killing of rhinos in protected areas in Assam including Kaziranga National Park.

Underscoring that study and monitor of illegal wildlife trade and route is very essential, the resource person from the IRF listed the following areas to be focused for protection of wildlife – close coordination of the stakeholders and enforcement agencies and NGOs; international cooperation; capacity building of the frontline forest staff, advance equipment, regular follow up of the cases and increase of conviction rate.