Padma Hazarika’s success in capturing the elephant is an example of his expertise in the field: Sonowal

The Sootea MLA led the operation to capture the wild tusker with the help of forest officials and his aides.

As a true public representative, the Sootea MLA offered his help to the forest department to provide succor to the people who were living under constant fear of attack by the wild elephant, the CM stated.

“His success in capturing the elephant is an example of his expertise in the field,” the CM added.

An elephant, terrorising the local populace in Goalpara for quite some time, has finally been captured and subdued much to the relief of the masses.

I thank MLA Shri Padma Hazarika for leading from the front in the mission to safeguard the lives of people. pic.twitter.com/2KCEX1rQZe

MLA Hazarika earlier offered his help to the forest department in the operation to capture the wild elephant which had reportedly killed five people in Goalpara recently.

The wild elephant, named by the locasl as ‘Laden’, which created havoc for the last few days, was successfully tranquilized at Kheropara reserve forest under the Rongjuli range forest.

The aggressive jumbo was tranqulised and brought under control after merely half an hour’s of combined operation under the supervision of MLA Padma Hazarika with support from an expert veterinary team.

The operation was carried out in presence of senior forest officials.

MLA Hazarika gave credit to the people for the success.

“The wild elephant could be captured due to the blessings of the public and cooperation from every member of the forest team,” said Hazarika.

“It was an aggressive and huge animal without fear. Without bothering a big team of six ‘Kunkis’ (trained elephants), it chased us directly once we entered the forest,” the MLA said.

Nirod Hazarika, elder brother of Padma Hazarika and a veteran wildlife activist, triggered the first gunshot to tranquilize the elephant. 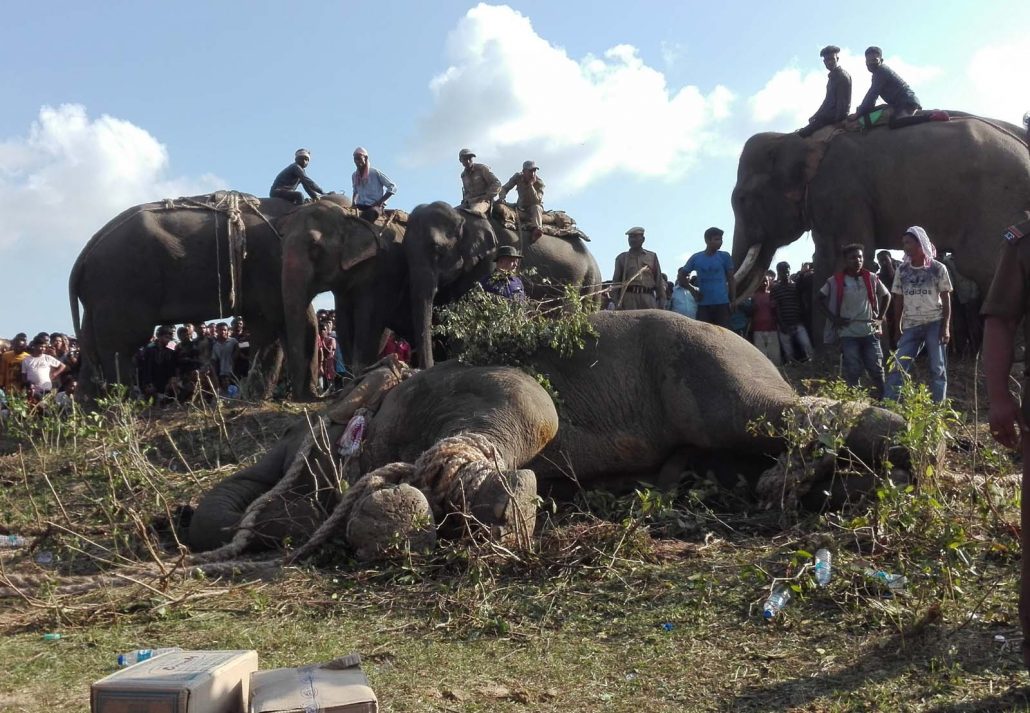 Nirod Hazarika said, “When the other trained elephants became restless and were backtracking, the elephant of Goalpara forest division, on which I was riding, stood there and gave me a chance to trigger the first shot to tranquilize it.”

“Then Padma triggered the second shot. It still chased us up to a distance before the medicine began working,” he added.

The elephant was tied properly with three strong logs installed immediately near the spot of tranquilization.

However, the jumbo is scheduled to translocate soon to a safer forest outside the district.

The male elephant had killed five persons on October 29 at Matia, Sidhabari and Mamudpur of the district.

On the same day, the chief minister ordered the forest department to tranquilize and translocate the jumbo.

Later, an eight-member expert committee was formed with the top brass of the forest department.