A “Himalayan Challenge” for Assam 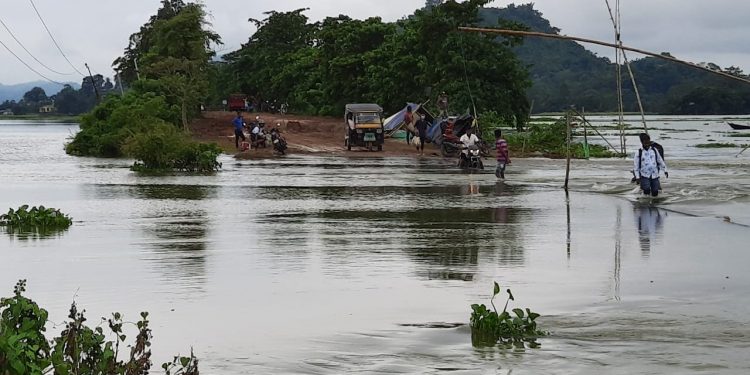 Rocky Orang (24), Rajkumar Tanti (30) and Lohro Orang (48) of Dighaltarang Tea Estate under Doomdooma circle in Assam’s Tinsukia district went fishing with five others in the Dangori River on June 26. But their boat capsized and the three were washed away by the surging waters.

Reports of two youths–Bishnu Tanti and Iliyas Khal of Bisakupi Tea Estate washed away by the surging waters of the Dangori River came the next day taking the overall flood fatality in the State to 23.  Flood waters also washed away the bridge that connects Doomdooma to Baghjan where a massive fire broke out after a 14-day uncontrollable oil leak from a damaged oil well at OIL’s production well site.

The washed away bridge made the operations more complicated to bring the fire under control. Assam Chief Minister Sarbananda Sonowal took stock of the situation and asked the deputy commissioner, Tinsukia to lay one Bailey bridge to ensure unhindered movement of vehicles engaged in emergency services.

On Monday, reports of dead fish and other aquatic birds and animals floating on the Maguri-Motapung beel created panic among local people.

Irawati Narah’s family performed the last rites of the deceased woman in a boat as no high ground was in sight in the Chabua Revenue Circle of Dibrugarh district. The Dibru and the Dangori rivers are in high spate while the Brahmaputra, flowing a little distance away creating flood fury from Sadiya to Dhubri. The flood situation in Dibrugarh spread to 120 villages besides inundating most of city of Dibrugarh.

In Tinsukia, over 60,000 people from 140 villages of the district had been severely affected. More than 50 relief camps were set up in the district. For some 1,800 families– evacuated after the blow-out and staying at the dozen–odd relief camps of Baghjan and Dighaltarang—things become more complicated as flood waters inundated relief shelters.

“It has become an ordeal to even use the toilets. With living conditions worsening inside the make-shift relief camps, how can you think of social distancing?” asked one of the inmates of a relief camp at Guijan. Altogether 640 of families from greater Natun Gaon area were forced to take shelter in two schools at Guijan as an aftermath of the inferno at Baghjan.

The second surge of flood devours most of Assam’s flood-prone districts amid community transmission of COVID-19 cases. An alarmed administration grappling dual surges of a severe flood and more severe COVID-19 spread have developed an SOP (Standard Operating Procedure) for relief camps which has been distributed to every district so as to deal with the Covid-19 situation as the number of positive cases show an upward swing. The Chief Executive Officer of the Assam State Disaster Management Authority (ASDMA), MS Manivannan, assured that they are well-prepared to take on this dual challenge.

At least 200 relief camps were set up across the state where some 30,000 people had taken shelter, said an ASDMA release.  To deal with the challenge of COVID-19 from spreading in the relief camps, ASDMA has drawn up standard operating protocol that defines the capacity of each camp so that people are not pushed to more vulnerability. As many of the flood-hit districts have quarantine camps, any suspected COVID-19 case in a flood relief camp would be sent to the nearest quarantine centre, stated the guidelines.

A “Himalayan Challenge” for Assam

The Assam government geared up arrangements for return of most people who were stuck outside the state and their quarantine facilities before June 10 so that the state could shift its focus to flood preparations. On May 3, Assam health minister Himanta Biswa Sarma during an interactive session with senior journalists said that the state authorities has been dealing with a Himalayan problem because it has to organize tackling flood in the course of the monsoon season and the outbreak of the Japanese encephalitis, while controlling the COVID-19 spread.

“By August 15, Assam typically witnesses flood and Japanese encephalitis, and so, the state is dealing with a “Himalayan challenge”, said Sarma.

But by the last week of May the season’s first flood, triggered by cyclone Amphan, wreaked havoc in the state.  Nearly three lakh people in nine districts of the state had been severely hit.

With floods, cases of Japanese Encephalitis (JE) had also been reported from some districts of Assam. The Mission Director of National Health Mission (NHM) in Assam confirmed three cases of JE and 79 cases of Acute Encephalitis Syndrome (AES) from the districts of Cachar, Dibrugarh, Sonitpur, Kamrup, and Morigaon. So far, there have been no deaths. Assam reported 154 deaths from JE last year. The combined number of deaths due to JE and AES last year was 600.

After an initial low count of COVID-19 cases when the lockdown started, Assam has seen a spike in the numbers with eased travel restrictions and more people returning home. On an average, the State is now getting around 250 positive cases every day, and half of them are from Guwahati.

The State government has enforced a complete lockdown in Kamrup Metro district for 14 days from Sunday night as well as impose night curfew from 7 pm to 7 am across the State from Saturday and weekend lockdowns in towns and municipal areas till the COVID-19 situation improves. Only pharmacies and hospitals will operate during the 14-day lockdown in the city besides a few emergency services. “We have been forced to take the tough decision and we are taking it with lot of pain. We are left with no other option,” said the health minister.

Heavy monsoon rains lashed India’s Northeast since the third week of June. Incessant rainfall and release of dam water further worsened the flood situation in Assam impacting about half a million people in 1, 289 villages in 61 revenue circles of 21 districts. Hundreds of thousands were displaced from their homes. State authorities warn of a worsening situation with prediction of more rainfall.

Dhemaji is the worst-hit with four deaths and more than 200 villages affected, followed by Tinsukia, Dibrugarh and Majuli. Ferry services to Majuli have been suspended.

The floodwaters also took a heavy toll on livestock. More than 70,000 livestock have so far been affected over 40,000 hectares of crop area have been submerged states ASDMA bulletin.

The flood situation worsened with neighbouring Bhutan releasing over 2700 cumecs of excess water from Kurichu dam, about 30km from Barpeta Road in lower Assam on Thursday that led to the swelling of Beki, Manas, Pagladia, Kaldia and Pohumara rivers, affecting lower Assam districts.

Assam chief minister Sarbananda Sonowal taking stock of the prevailing flood situation directed the different district administrations to keep constant vigil over the water level in their respective districts, especially in the wake of reported release of water from Bhutan.

Last year, the minister of state for Jal Shakti Rattan Lal Kataria informed the Lok Sabha that Assam has nine of the 39 most flood-prone districts in the country and Dhubri tops this list. The minister was referring to a report submitted by a committee headed by the Ganga Flood Control Commission (GFCC) while answering to a question by Dhubri MP Badruddin Ajmal.

According to the report, the nine most flood-prone districts of Assam are Dhubri, Lakhimpur, Morigaon, Dhemaji, Barpeta, Jorhat, Goalpara, Sivasagar and Nalbari.

Reports of damage of infrastructure and breaches in embankments poured in from different places. Although the State chief minister had, on April 30, directed the water resources department to complete all repair work on weak and breached embankments before the onset of monsoon the annual job of repairing river embankments came to a halt with the country-wide lockdown on March 25. Resentment grew along the banks against the administration for in-complete projects of embankment repair, maintenance and also anti-erosion work.

Floods and river-bank erosion pose a grave risk for the entire Brahmaputra valley. Globally, the Brahmaputra river system is perhaps the only one known for its loss of about 100 square kilometres of land every year due to bank erosion.

On May 26 part of a guard wall of the 2000 MW Subansiri Lower Hydroelectric Project (SLHP) breached. Moreover, erosion at the dam site created panic and riparian anxiety as a coffer dam was washed away. The NHPC authorities issued a clarification on local newspapers on Sunday stating that breach of downstream coffer dam and river flowing above the dam during monsoon is a normal event.

The clarification also stated that slope failure in diversion channel along left bank road is due to prolonged flow of water in diversion structures and is in no way related to the safety of the dam. The slopes shall be repaired after monsoons during the balance construction period after which the Diversion Tunnels shall be plugged. Earlier, the NHPC stated that the erosion site was 500 metres away from the main dam and would not make any impact.

The recent events led to protests by various organizations reiterating the apprehensions expressed by experts on the selected site for the mega-dam of the present dimension which is sensitive geologically and seismologically.

The Assam State Action Plan on Climate Change (2015-2020), states that climate change plays a major role as seen in the recent patterns in flooding in Assam. From April to late September—the state witness number of surges that would cripple the state’s economy each time. Further, thoughtless construction of dams on rivers in the name of flood control and the careless operation of dams have converted floods into a disaster.