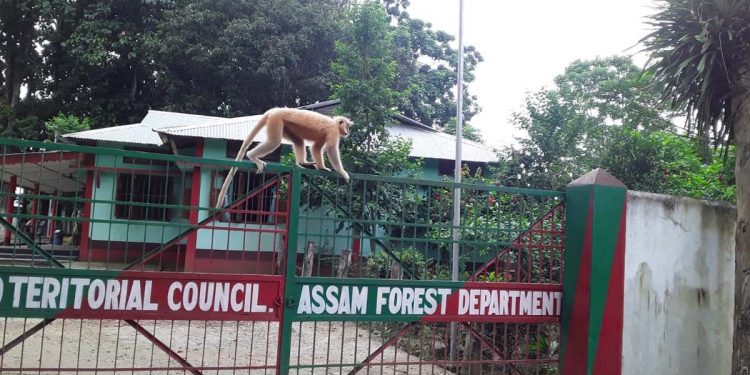 A golden langur seen on the gate of a forest department's office in Manas. Image credit - Northeast Now

The census and habitat evaluation of golden langur in Manas is being carried out jointly by the forest department of Bodoland Territorial Council (BTC) and the Primate Research Centre, Northeast India.

The golden langur census and habitat evaluation will continue in the tiger reserve till March 24, 2020.

The census was flagged off by RN Boro, deputy director of Manas Tiger Reserve in the presence of warden NK Dey and Dr Jihosuo Biswas, coordinator, the Primate Research Centre, Northeast.

The team for the golden langur census and habitat evaluation, led by Dr Jihosuo Biswas, has a total of 12 enumerators.

Talking to reporters on the occasion, Dr. Jihosuo Biswas said during a census carried out in the Manas Tiger Reserve in 2009, 4,231 individuals were found.

Biswas also said, “During a census carried out in Chakrashila Wildlife Sanctuary in 2016, a total of 698 individuals were found.”

The wildlife expert blamed the pressure of development and the loss of habitat for the animal for the decline in the population of golden langur in Bhutan.

He said the same fate is expected in India too.

Biswas appealed to all sections of the people to help and support golden langur.

He said, “We will survey the remaining fragmented habitats in the southern range of Manas Tiger Reserve including Chakrashila Wildlife Sanctuary and Aie Valley Division after completion of this census.”

He said the population of golden langur may have declined due to deforestation and the coming up of several big projects in the forest areas.