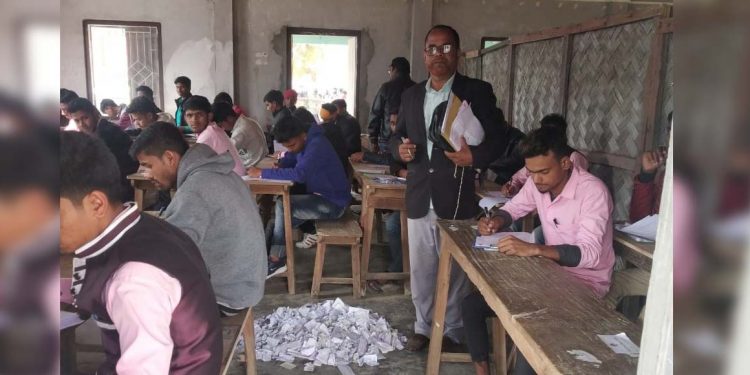 View of an examination hall from where the authorities seized cheating paper. Image credit - Northeast Now

The principal-cum- in-charge of an examination centre in Dhubri was also arrested by police.

Earlier on Monday, in Dhubri district alone, 21 candidates were expelled for adopting unfair means on the first day of the HSLC Examination conducted by the Board of Secondary Education Assam (SEBA).

Apart from that, one Arabic teacher, identified as Joynal Abedin of Chirakhowa High School, was arrested for allowing the candidates to adopt unfair means in the examination hall.

During the Higher Secondary final examination on Wednesday, 14 students were caught cheating in two examination centres.

Dr. A Ali Ahmed, Dhubri district observer for Higher Secondary Examination said, “The students were expelled as soon as they were found cheating while the principal-cum-examination centre in charge of Alomganj Rangamati Junior College was arrested for failing to discharge his duties.”

The arrested principal has been identified as Sah Jamal Seikh.

“The examination centres from where the candidates were expelled are – Alomganj Rangamati Junior College (8) followed by Chapar HS School (6) respectively,” added Ahmed.

This year, a total of 8,454 students are appearing in 20 examination centres for HS final examination in Dhubri district.

In spite of several measures taken to avoid unfair practice and Section 144 of CrPC being imposed by the district administration around the examination centres, students were found to be involved in malpractices.

Saju Kr Yadav, inspector of schools, Dhubri told Northeast Now that all these students were caught by the authorities while routine frisking during the examinations being conducted by SEBA and AHSEC.

The students were immediately expelled by the authorizes as soon as they were caught by the higher authorities on the first day of the examination itself while the lawful initiative has been taken against the teachers who failed to discharge their duties according to norms, as added by Yadav.

On condition of anonymity, one conscious guardian of Dhubri town said, ”It is shameful that a total of 35 students in Dhubri district (21 in HSLC and 14 in HS exams) have been expelled on the first day of the exams.”

“And beyond that, the arrest of two teachers for allowing the students to adopt unfair means during board examination is also a matter of grave concern,” he added.

“The district administration has instructed all the invigilators and magistrates on duty to ensure that no unfair means are being used during the examination,” said Animesh Talukdar, additional deputy commissioner, Dhubri.