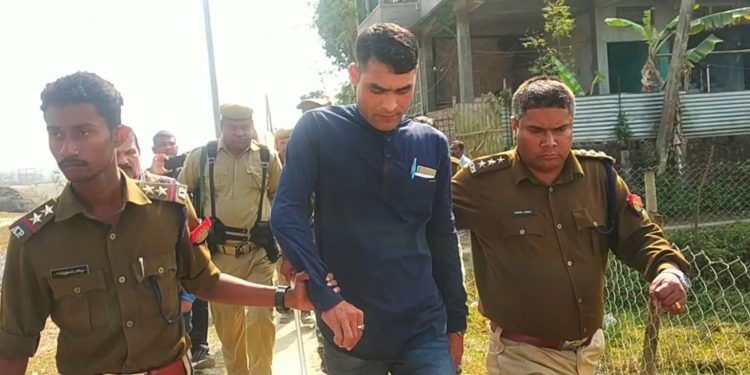 Simanta Kalita, one of the two miscreants who attacked two students in Pathsala, in police custody. Image: Northeast Now

The attack was made when the two were on their way to Pathsala Sikshapith- their HS examination centre.

Eyewitnesses said that Suman and Gunin were travelling on a motorcycle when a car came from behind and blocked their way.

Two persons came down from the car and attacked the two students and injured them seriously.

Locals present in the scene rushed for the duo’s rescue and attacked the two miscreants, who have been identified as Simanta Kalita and Dhiraj Kalita.

While Simanta was captured by the people, Dhiraj, however, managed to escape.

He was later handed over to the police.

The two students were immediately taken to the hospital for treatment.

After providing them first aid, Suman was taken o Nalbari and Gunin was sent to Barpeta for better treatment.

An FIR was lodged with the Pathsala Outpost against the two culprits.