Initiative taken to create an easy learning teaching process, enabling the children to learn with ease and efficiency: Thokchom Radheshyam

Speaking on the occasion minister Radheshyam said the comic textbook is the first of its kind in the state.

He also said the main objective of the initiative is to create an easy learning teaching process, enabling the children to learn with ease and efficiency.

The minister said the new idea of the education department is to implement the comic textbook on trial basis.

He made an appeal to the zonal education officers and teachers present on the occasion to conduct the examination in a better way.

Radheshyam also hope that better pictorial representation of contents will make the learning process more interesting and increase the creativity among the children.

In his speech, commissioner (Education-S) T Ranjit Singh expressed the hope that the comic textbook will attract the attention of the students and help them in gaining knowledge and sought suggestions for improvements. 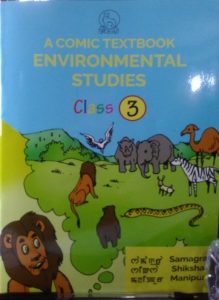 Highlighting the importance of the initiative of the Comic Textbook for Environmental Studies for Class III, the directorof education department, Thokchom Kirankumar said each story in the comic textbook focuses on the concepts given in the textbooks.

Kirankumar also spoke about the idea to bridge the shortcomings in curriculum, quality of textbooks, shortages of teachers, among others.

The officials concerned of the department of Education (S), zonal education officers and teachers attended the programme.

The Manipur government has taken up various kinds of initiative.

It launched ‘School Fagathansi Mission’, a government initiative taken in January 2019 to improve the schools across 60 Assembly constituencies.