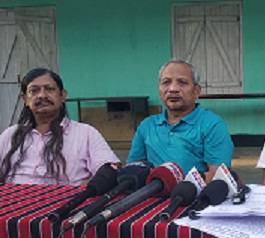 The Assam Sanmilita Mahasangha (ASM) has demanded that the National Register of Citizens (NRC) authorities take 1951 and not 1971 as the cut-off year in the ongoing updation process of Assam’s citizens register.  The ASM made this demand at a Press conference organised by the Bijoy Bey-led faction of the Karbi Students’ Association (KSA) in Dhubri on Wednesday and stated that taking 1971 as the cut-off year is “illegal”.

The ASM working president, Matiur Rahman, observed, “To check the unabated influx of illegal immigrants from Bangladesh and for detection of foreigners, the All Assam Students’ Union (AASU) and the All Assam Gana Sangram Parishad (AAGSP) launched the Assam Movement in the year 1979. The outcome of the movement led to the signing of the Assam Accord on August 15, 1985 between the AASU, AAGSP, Central Government and the Assam Government. For detection and deportation of foreigners from Assam, January 1, 1966 was the base date. The first NRC was prepared in 1951. All foreigners coming to Assam after January 1 and up to March 24, 1971, should be detected in accordance with the provisions of the Registration of Foreigners Act and Registration of Foreigners Rules, 1939.”

Rahman said ASM is fighting four cases in the constitutional Bench of the Supreme Court with regard to the present NRC updation in Assam. He further stated, “The first NRC was prepared in 1951 and we want to continue with that year. The present NRC updation in Assam taking 1971 as the cut-off year is unconstitutional and illegal, it should be 1951. We are waiting for the final verdict of the Supreme Court. If we are not satisfied, we will approach the International Court of Justice for protection of the rights of the indigenous people of Assam with support from international communities.”

Flaying the All Assam Students’ Union (AASU), he further stated, “The AASU and AAGSP are to be blamed for siding with the Government and taking 1971 as the cut-off year instead of 1951. The AASU, AAGSP and the Government have a plan to wipe out the indigenous population of Assam and the indigenous communities will have to stand up to and fight for protection of their rights.”

Rahman also demanded that as per the United Nations Declaration on the Rights of Indigenous Peoples (UNDRIP) of September 13, 2007, the “political, social, land, education and economic rights of the indigenous people living in Assam should be protected”. The Hills Tribal League (HTL), KSA, Kuki National Assembly (KNA), Kuki Students’ Organisation (KSO) and the Karbi Students and Youth Council (KSYC) supported the said demand made by the ASM.