Appeal for free and fair repoll in Arunachal Pradesh

Former Chief Minister Gegong Apang of Janata Dal (Secular) and other JD(S) candidates held that polling of the first phase on 19 poll booths in the state had not been carried out smoothly due to malfunction, damage of EVMs and incidents of violence due to lack of security personnel 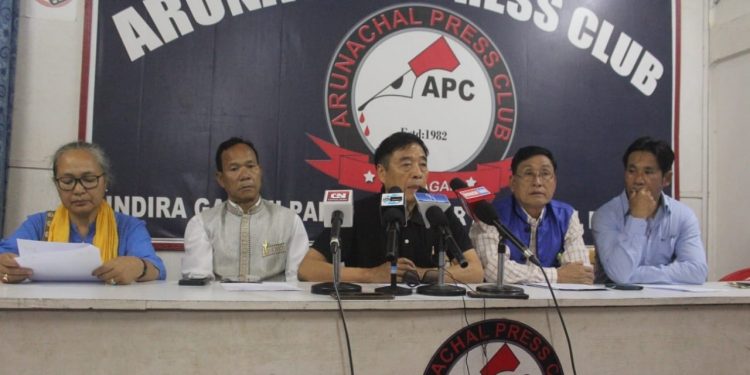 The Election Commission had on Wednesday announced re-polling in the 19 booths spread over eight districts. The election process in these booths was suspended on April 11 following reports of malfunctioning and damage of electronic voting machines, or EVMs.

Addressing media persons at Arunachal Press Club here, Apang said that there has been no improvement in the EVM system despite tall claims made by the government, leading to polling being either delayed or suspended.

“We are not satisfied with the EVM system as there is high apprehension of malfunctions in re-polling too,” he said, adding he prefers the slip system over EVM for free and fair voting.

Expressing serious concern over reports of violence, intimidation of election officials, etc., in many places, the former CM alleged lack of preparedness on the part of the government to conduct the election.

Also read: Another man shot dead in Arunachal ahead of LS polls

“Proper security arrangement was not made. Adequate security personnel were not deployed which led to violence and damage of EVMs in many places,” Apang said while seeking full-proof arrangement during the re-poll.

He also sought re-polling in Singging village under Tuting-Yingkiong constituency, claiming that unfair election was held there as the polling agents of other parties were threatened and not allowed to enter the booth during the election.

JD(S) candidate from Arunachal West parliamentary constituency, Jarjum Ete also expressed serious concern over EVM malfunctioning. Claiming that polling couldn’t be started on time in many places due to faulty EVMs and VVPATs, she said that the election preparedness was not up to the mark and the need of the hour is to rectify immediately for the re-poll.

“Re-polling should be conducted peacefully and successfully without EVM malfunction and violence,” Ete said.

JD(S) candidate from Raga Assembly constituency, Takum Kabak also raised serious concern over the violence and EVM failure in the election. He accused BJP workers of hampering the election process by blocking roads and damaging EVMs.

Seeking full-proof arrangement for the smooth and successful conduct of re-polling, Takum appealed each and every individual to cooperate and let the election process end peacefully.