Wait finally gets over! Subhash Chandra Bose’s birth anniversary to be celebrated as ‘Parakram Diwas’

A Gazette notification has also been issued by the Centre in this regard.

The Centre has announced to observe the birth anniversary of Netaji Subhash Chandra Bose on January 23, every year from now onwards as ‘Parakram Diwas’.

This was informed by union Minister Prahlad Singh Patel.

A Gazette notification was also issued by the Centre, undersigned by Joint Secretary Nirupama Kotru.

“To honour and remember Netaji’s indomitable spirit and selfless service to the nation, Government of India has decided to celebrate his birthday on the 23rd day of January every year as ‘Parakram Diwas’ to inspire people of this country, especially the youth, to act with fortitude in the face of adversity as Netaji did, and to infuse in them a spirit a patriotic fervour,” read the Gazette notification. 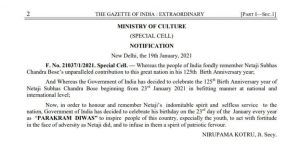 Notably, Prime Minister Narendra Modi will take part in the first ‘Parakram Diwas’ programme to be held in Kolkata on January 23.

January 23 this year will be Bose’s 125th birth anniversary.

PM Modi will also inaugurate an exhibition at the National Library in Kolkata to observe ‘Parakram Diwas’.

Around 200 Patua artistes from West Bengal will make a painting on a 400-metre-long canvas depicting Bose’s life.

Meanwhile, Union Petroleum Minister Dharmendra Pradhan will participate in a programme at Cuttack in Odisha.

Notably, Cuttack is the very place where Netaji Subhash Chandra Bose was born.

Another programme to be held at Haripura village in Gujarat’s Surat district where Bose was elected as the President of the Indian National Congress in 1938.