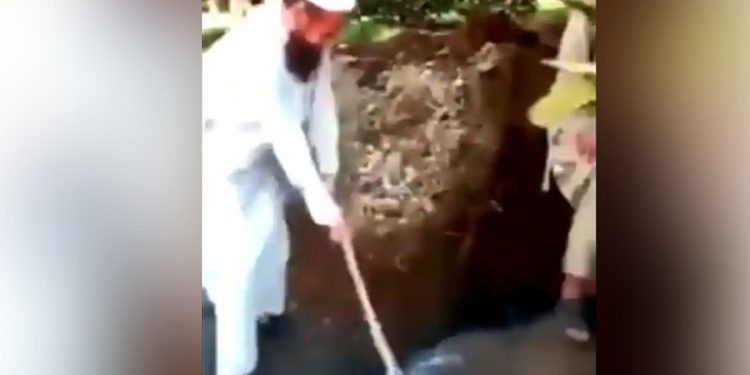 A screen grab from the video. Image credit: Hindustan Times

Construction workers, in Pakistan’s  Pashtun-dominated Khyber Pakhtunkhwa province’s Mardan district, smashed a statue of Gautam Buddha into pieces on Saturday because they considered the relic to be “unIslamic”.

The Buddha statue was discovered while digging the foundation for a house in Mardan’s Takht Bhai area.

The incident has drawn the ire of the authorities concerned.

A video of the incident has since gone viral on social media, which showed the construction workers smashing the Buddha statue using a sledgehammer and expressing their resentment against the “unIslamic” relic.

“The authorities have taken note of the incident and are looking into the matter,” local police said.

Abdul Samad, director, archaeology and museums, Khyber Pakhtunkhwa, said, “We have located the area and we will have those involved arrested soon.”

Takht Bhai is known for its relics since it was a part of the Gandhara civilisation.

Excavated in 1836 for the first time, archaeologists have dug out hundreds of relics made of clay, stucco, and terracotta in the area.