The Cabinet Committee on Economic Affairs (CCEA), chaired by Prime Minister Narendra Modi, approved the increase in the Minimum Support Prices (MSPs) for all mandated Rabi crops for marketing season 2021-22.

“This increase in MSP is in line with the recommendations of Swaminathan Commission,” said Cabinet Committee on Economic Affairs (CCEA).

“In view of nutritional requirements and changing dietary pattern and to achieve self-sufficiency in pulses and oilseeds production, the Government has fixed relatively higher MSP for these crops,” a statement issued by the CCEA said.

The highest increase in MSP has been announced for lentil (Rs. 300 per quintal) followed by gram and rapeseed & mustard (Rs. 225 per quintal each) and safflower (Rs. 112 per quintal).

For barley and wheat, an increase of Rs. 75 per quintal and Rs 50 per quintal respectively has been announced. The differential remuneration is aimed at encouraging crop diversification. 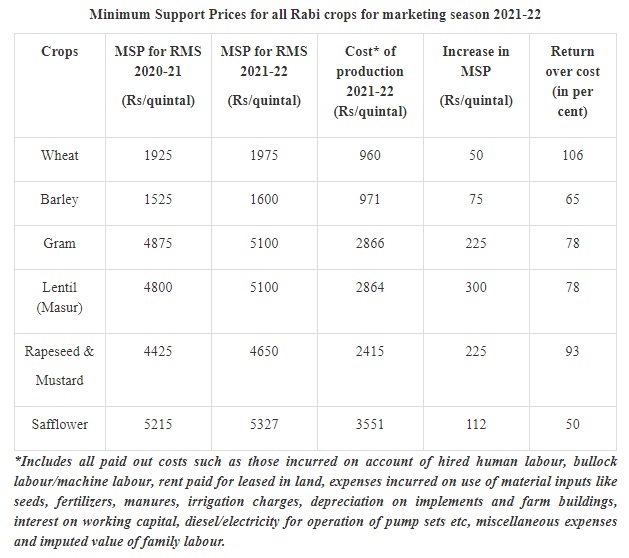 The increase in MSP for Rabi crops for marketing season 2021-22 is in line with the principle of fixing the MSPs at a level of at least 1.5 times of the All-India weighted average Cost of Production as announced in Union Budget 2018-19.

The expected returns to farmers over their cost of production are estimated to be highest in case of Wheat (106%) followed by rapeseed & mustard (93%), gram and lentil (78%).

For barley, return to farmers over their cost of production is estimated at 65% and for safflower, it is 50%.

Support is in the form of MSP as well as procurement.

In the case of cereals, Food Corporation of India (FCI) and other designated State Agencies would continue to provide price support to the farmers.

The government has set up a buffer stock of pulses and domestic procurement of pulses is also being done under Price Stabilization Fund (PSF).

“Despite global COVID-19 pandemic and consequent nationwide lockdown, timely intervention made by Government has led to an all-time record procurement of wheat at about 39 million tonnes for RMS 2020-21,” the CCEA said.