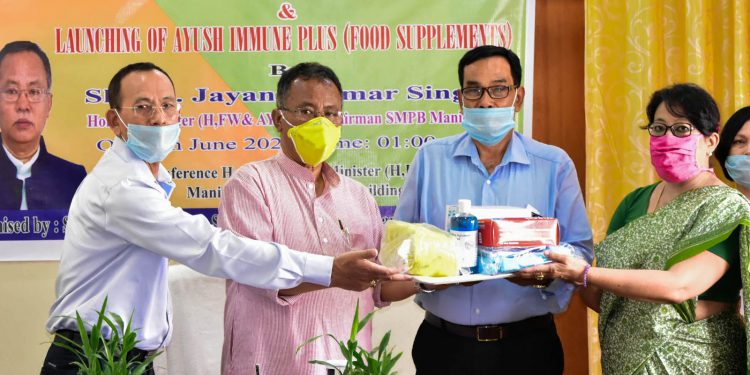 Launching the Ayush Immune Plus at a function at Old Secretariat, South Block, Imphal, Minister Jayantakumar said that the world is facing a war against COVID-19.

Informing that the state health department has been putting all possible efforts to combat this pandemic, he said that with the limited fund of the AYUSH Department, some of the essential medical kits which can be used as protective gears during this pandemic of COVID-19 had been procured and the same will be distributed to all districts of the State through concerned Chief Medical Officers(CMO).

Medical kits were distributed to the CMOs of Imphal West, Imphal East and Bishnupur districts as a phase one. The remaining districts will be covered soon, he added.

Minister also maintained that the launched Ayush Immune Plus will be helpful to the users since the food supplement contains nutritional values gathered from different indigenous medicinal plants found in the state.

He further maintained that the department also has planned to visit old age homes located in Imphal East and West districts as a part of International Yoga Day which falls on June 21.

As a part of the observation, Ayush team will distribute medical kits, the water tank and also provide yoga training to the inmates on June 18, 2020.

He also appealed the media fraternities to take a bigger role to propagate awareness on COVID-19.

It may be mentioned that the total number of COVID 19 positive cases in Manipur had already been crossed 450 marks.