After a video of an elephant from Assam, being beaten up by its mahout and his assistant, went viral, the two attackers have been arrested by the Tamil Nadu forest department.

The incident took place at the annual rejuvenation camp for temple and mutt elephants at Thekkampatti in Tamil Nadu.

The 13th annual rejuvenation camp for 23 temple and three mutt elephants from Tamil Nadu and Puducherry began on February 8.

Organised by the HR&CE Department, the 48-day-long camp will conclude on March 27.

In the video, the mahouts are seen mercilessly hitting an elephant on its legs with sticks.

The female elephant has been identified as 19-year-old Joymala alias Jayamalyatha of Andal Temple at Srivilliputhur.

The elephant, which is chained to a tree, is heard crying in pain as it is hit by the mahouts.

The attackers have been identified as mahout Vinil Kumar (45) and his assistant Sivaprasad.

While sharing the video on his Twitter handle, Indian Forest Service (IFS) officer Praveen Kaswan wrote: “Mahout, kavadi booked for thrashing an elephant at rejuvenation camp. It was such a sad incident.”

It was such a sad incident. https://t.co/ijAarTBmfy

Confirming the arrest of the mahout and his assistant, Meet Ashar, the advisor of the Maharashtra Animal Welfare Board, tweeted: “Both mahouts have been booked & arrested under Sec 51 of WPA 1972 by Coimbatore FD.”

“Mahouts have been placed under suspension by HR&CE, Govt of TN under whose care the elephant is. We are in touch with forest officials to ensure perpetrators are punished to fullest extent of law,” he added.

Both mahouts have been booked & arrested under Sec 51 of WPA 1972 by Coimbatore FD. Mahouts have been placed under suspension by HR&CE, Govt of TN under whose care the elephant is. We are in touch with forest officials to ensure perpetrators are punished to fullest extent of law

In a report by Northeast Now, published on November 7, 2019, it was stated that a 33-year-old female elephant from Assam was allegedly in the illegal custody of a temple at Srivilliputhur in Tamil Nadu and was used for begging.

It was reported that the elephant, Joymala alias Jeyamalyatha, was in the custody of Nachiyar Temple in Srivilliputhur without any valid documents.

The 33-year-old elephant was taken to Tamil Nadu on a temporary lease in 2008 and was never sent back.

In reply to an RTI query, filed by animal rights activist Antony Clement Rubin, the forest department of Tamil Nadu informed that one Girin Moran of Kakopathar in Tinsukia district in Assam was the owner of the elephant. 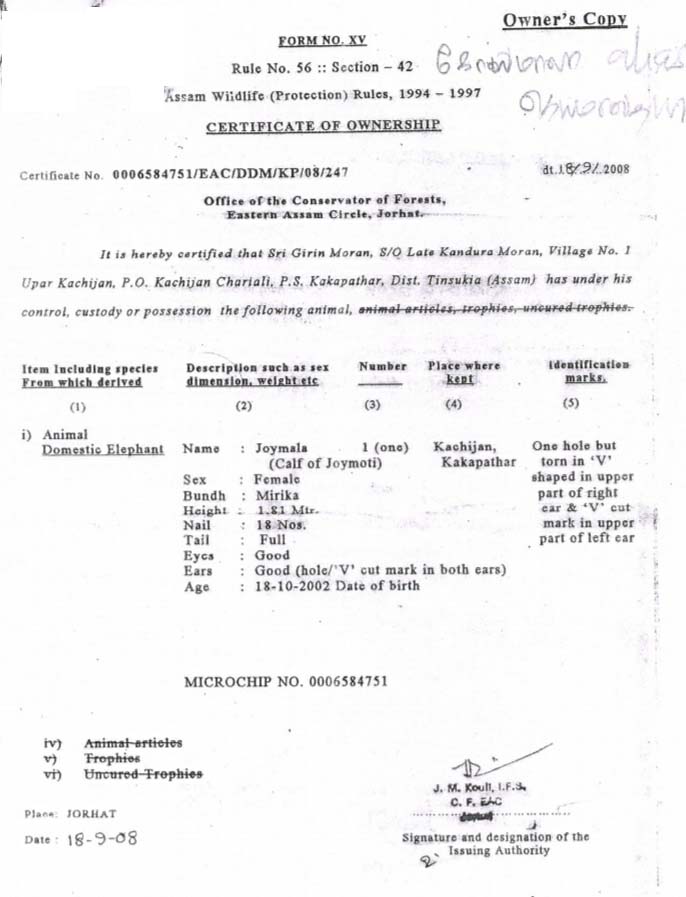 Documents available with the Tamil Nadu forest department show that Joymala was leased in 2008 only for 6 months.

Since 2008, the management of the Nachiyar Temple used Joymala mainly for begging and religious rituals.

Northeast Now on July 22, 2021, reported that the Tamil Nadu Forest department was planning to send back Deivanai, a 12-year-old elephant from Assam, to her native state.

Deivanai (Prerona) was taken to Sri Subramania Swamy Temple at Madurai in Tamil Nadu in 2014.

But the elephant was shifted from the temple to the Elephant Rescue and Rehabilitation Centre (ERRC) at MR Palayam, Trichy on May 1, 2020 after she trampled a mahout to death.

This was revealed by the Madurai district forest office in its reply to an RTI query of animal activist Antony Clement Rubin filed on June 9, 2020.

In another report, published by Northeast Now on August 19, 2019 under the headline, “Ailing Assam elephant cries for help in Tamil Nadu”, said Kothai, a female elephant, which was transferred in 2001 from Assam to Adi Keshava Perumal Temple in Tamil Nadu, was in extreme pains, and was crying for immediate care.

Devotees complained that the temple authorities failed to provide proper shelter to the female elephant.

It has been reported that many elephants from Assam have been serving in various Hindu temples of Tamil Nadu Karnataka and Odisha.