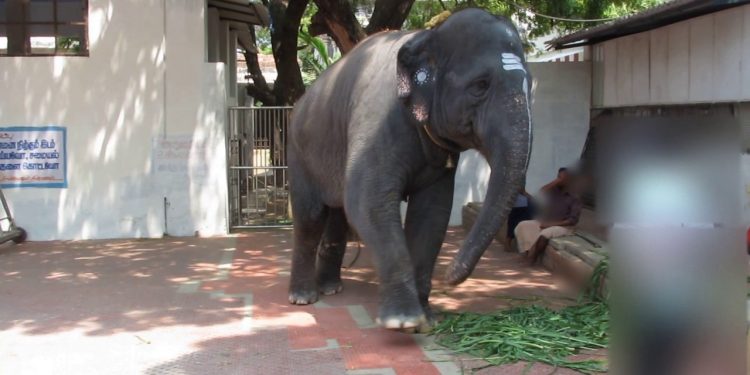 A 33-year old female elephant from Assam is allegedly in the illegal custody of a temple at Srivilliputhur in Tamil Nadu, and is being used for begging.

The New Indian Express reported that the elephant, Joymala alias Jeyamalyatha, is in the custody of Nachiyar Temple in Srivilliputhur without any valid documents.

The 33-year-old elephant was taken to Tamil Nadu on a temporary lease in 2008, and was never sent back.

In reply to an RTI query, filed by animal rights activist Antony Clement Rubin, the forest department of Tamil Nadu informed that one Girin Moran of Kakopathar in Tinuskia district in Assam is the owner of the elephant.

Documents available with the Tamil Nadu forest department show that Joymala was leased only for six months in 2008.

For the last 11 years, the management of the Nachiyar Temple used Joymala mainly for begging and religious rituals.

Despite several attempts, no officials of the temple management committee were ready to comment on Joymala.

Wildlife Crime Control Bureau in December 2007 had reported that 259 captive elephants transported outside Assam between 2003 and 2007 did not return.

Sanjay Kumar Srivastava, the Chief Wildlife Warden said it is illegal to have an elephant without ownership certificate.

During a recent verification, the Tamil Nadu Forest department found that there are seven elephants in the state whose ownership certificates were issued by Assam forest department.

Srivastava said he has written to Ranjana Gupta, the Chief Wildlife Warden of Assam to take back the seven elephants immediately.

However, Ranjana Gupta was not available for comments on the Tamil Nadu government’s request to take back the elephants.

She did not receive calls on her mobile.