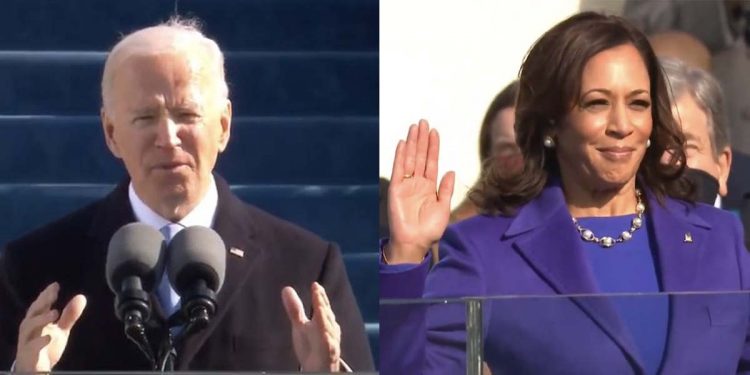 Kamala Harris is the daughter of immigrants from Jamaica and India.

Harris made history on Wednesday when she was sworn in as the US Vice President, becoming the first woman, the first Black American and the first Asian American to hold the second-highest US office.

Also read: Like Kamala Harris, US President-elect Joe Biden too has relatives in India!

Biden in his first remarks said, “Here we stand days after a riotous mob thought they could silence the will of the people. It will not happen, not today, not tomorrow, not ever — not ever.”

The newly-elected US President pledged that he would be honest with the country as it continues to confront difficulties, saying that leaders have an obligation to “defend the truth and defeat the lies”.

Biden said: “Hear me out as we move forward.”

“We must end this uncivil war that pits red against blue, rural versus urban, conservative versus liberal,” President Biden said in his inaugural address, echoing a defining theme of his presidential campaign.

“We can see each other not as adversaries but as neighbors. We can treat each other with dignity and respect. We can join forces, stop the shouting, and lower the temperature,” he added.

Meanwhile, former President Donald Trump walked out of the White House on Wednesday and headed to Florida, giving a miss to the inauguration event of Joe Biden.

In his final remarks before leaving the White House, Donald Trump said, “We love the American people and again it has been something very special. And I just want to say goodbye, but hopefully it’s not a long term goodbye. We’ll see each other again.”

In his farewell address to the nation on Tuesday, Donald Trump extended his wishes to the Biden administration.

“This week, we inaugurate a new administration and pray for its success in keeping America safe and prosperous,” Trump said.

After taking the oath, President Joe Biden on his official Twitter handle said: “There is no time to waste when it comes to tackling the crises we face. That’s why today, I am heading to the Oval Office to get right to work delivering bold action and immediate relief for American families.”

Now the real work begins, folks. Follow along at @POTUS as we build back better. pic.twitter.com/fHViqSqwp2