Election Commission bans victory procession after counting of votes for Assembly elections, bye-elections on May 2

In view surge in Covid19 cases, the Election Commission of India (ECI) has banned victory processions after the counting of votes for the State Assembly elections and by-elections on May 2, 2021.

The Election Commission of India in a notification issued on Tuesday banned the victory processions on the day of counting of votes for the general election to Legislative Assemblies of West Bengal, Assam, Tamil Nadu, Kerala and Puducherry 2021 and by-elections in various states.

The Commission issued brood guideline to conduct general election/bye-election during Covid19 on August 21, 2020 after receiving views/suggestions of national/state political parties.

The Commission has further considered the views/suggestions received from various chief electoral officers of states/UTs on election campaign and public meetings.

The Commission has fixed counting of votes for general election to Legislative Assemblies of West Bengal, Assam, Tamil Nadu, Kerala and Puducherry along with bye-elections in various states on May 2, 2021. 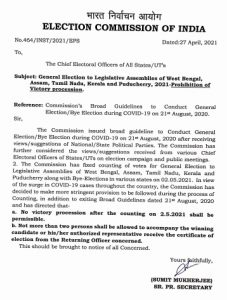 “In view of the surge in COVID19 cases throughout the country, the Commission has decided to make more stringent provision to be followed during the process of counting, in addition to exiting broad guidelines, dated August 23, 2020,” the notification said.

The Election Commission has “directed that no victory procession after the counting on May 2, 2021 shall be permissible”.

The Commission also directed that “not more than two persons shall be allowed to accompany the winning candidate or his/her authorised representative receive the certificate of election from the Returning Officer concerned”, the notification said.

The Election Commission of India’s direction comes a day after the Madras High Court holding the Commission responsible for the surge in Covid19 cases as it allowed the political parties to carry out huge election rallies.