Dilip Kumar – End of an era 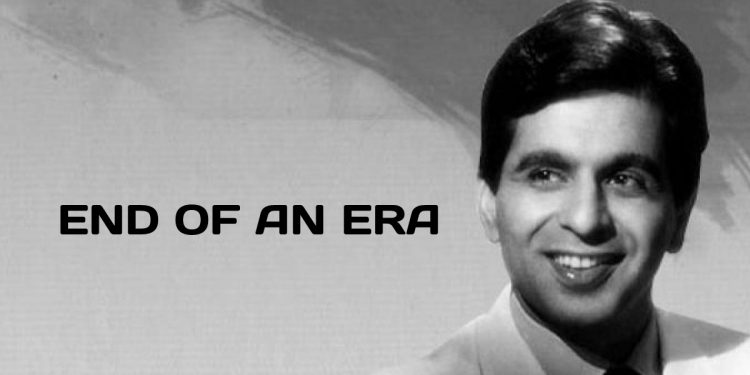 Indian movie industry has produced umpteen number of iconic cinemas and celebratory actors. But, among them all, the name of Dilip Kumar aka Yusuf Khan will remain legendary.

The slim boy with chiselled face had captivated audience of all ages and all generations across the globe with his acting versatility.

It would not be exaggerating to say that he was the Betaaz Badshah of Indian film industry and the actor of actors.

A role model for many of new generation actors, he pioneered the school of method acting in Indian cinematic experience.

Amitabh Bachchan once said that he was astonished to see how a non-Allabadian could act the nuances of an Awadhi character so impeccably.

In ‘Ganga Jamuna’ Dilip saab played the role of an Awadhi character and spoken dehati language so flawlessly.

His acting was such that he would enter into a character psychologically and only get out of it after the movie is over.

Therefore, he did only one movie a year. Although known for his tragic roles, he was no less in comedy.

The acumen of comedy is in full display in the movie ‘Ram aur Sham.’ It is one of my personal favourites.

Born in Peshawar of Pakistan as Yusuf Khan, he began his film career with ‘Jwar Bhata’ in 1944. Over the years, he had given a number of hits.

His movies like Devdas, Naya Daur, Ganga Jamuna, Kranti and Karma are epoch transcending. They will always be watched and treasured by generations of audience as great movies of Indian cinema.

Over a five-decade long career, he received highest number of Filmfare Best Actor Award (Shahrukh Khan sharing the same number 8 with him).

While receiving the award, as a true Indian citizen, he took permission from the then Indian Government.

Dilip Kumar’s passing away will create a void in Indian celluloid industry. His legend will be spoken of, his skills will be emulated by actors all over the world.

But none can replace the original. The void created by him passing away will remain empty. He will ever be missed by cine-goers. RIP Mr Dilip Kumar.