On arrival at Phulbari Border Outpost along Indo-Bangladesh border, the delegation was welcomed by Indian Army officers 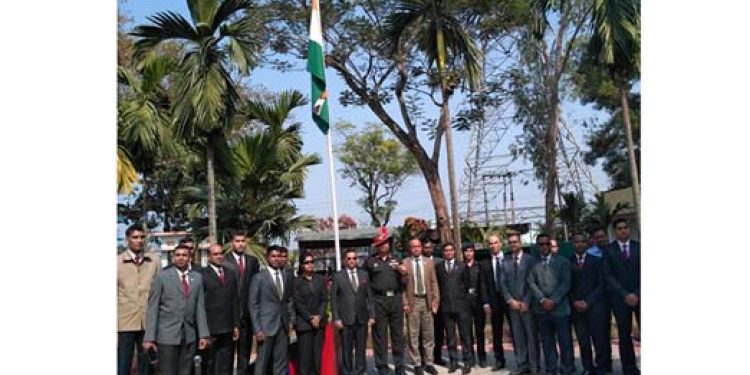 The 20-member Bangladesh military delegation being welcomed by Indian Army officers as they arrived at Phulbari BOP. Image - Twitter

A Bangladesh military delegation, comprising 20 members, is on a five-day visit to Trishakti Corps of Indian Army starting on Wednesday.

The delegation is being led by Maj Gen AHS Hasan.

On arrival at Phulbari Border Outpost along the Indo-Bangladesh international border, the delegation was welcomed by Indian Army officers and thereafter the team proceeded to the Indian Army stationed at Darjeeling in West Bengal.

“During their stay, the delegation will visit the Indian Army formations and units for briefing on various initiatives on military training by the Indian Army,” stated Guwahati-based defence PRO Lt. Col. P. Khongsai.

“They will also be familiarised with training in mountain warfare and will be shown various training institutions including HMI Darjeeling,” added the defence PRO.

Besides activities of professional nature, sports and cultural events are also being organised in the honour of the visiting team.

The visit of military delegation is aimed to foster a closer cooperation between both the armies.

The bonhomie and cooperation developed through such visits would go a long way towards enhancing the spirit of mutual understanding and friendship in the years to come.

The team will depart back for Bangladesh on November 18, 2018.

The Meghalaya-based defence PRO uploaded images of the Bangladesh military delegation on his Twitter handle on Wednesday.

The team will visit the various formations and units for briefing on various initiatives on military training by @adgpi.@DefenceMinIndia@SpokespersonMoD pic.twitter.com/dmrn3SbD9R