The Footprints: Rhythms of the Euro Cup 2021 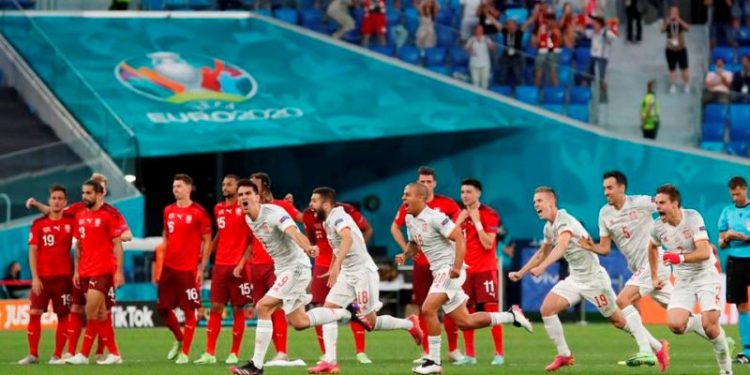 The first two-quarter finals of the Euro Cup 2021 played on July 2 & 3 were Switzerland vs. Spain & Belgium vs. Italy that left behind glorious imprints. In the first match, Spain won in the penalty shootout. Spain was rewarded early with a goal in the first half, which came from an own goal by a Swiss player.

Switzerland equalized in the 42nd minute, and Xherdan Shaqiri was the scorer. And those were the only two goals of the match. Switzerland’s defence deteriorated after Remo Freuler got a red card and the team got reduced to 10 members. Spain played very aggressive and made Switzerland completely defensive.

Spain had a lot of shots but failed to convert them into goals as the Swiss goalkeeper Yann Sommer skilfully thwarted the aggressive opponent and saved his team almost singlehandedly. Sommer earned the hearts of millions by showcasing his tactical and amazing defence skills. Switzerland could not do well in the penalty shootout, scoring only 1 and conceding 3. So, Spain qualified for the next round.

The next match played between Belgium and Italy was thoroughly exciting. Italy dominated the whole match, where they scored 2, one by Nicolo Barella and the other by Lorenzo Insigne. Lukaku of Belgium scored a penalty, but that was not enough to beat their opponent. Belgium was playing well in the previous matches, but they played somewhat average against Italy. Belgium’s counterattacks were great but Italy’s defence which included players like Leonardo Bonucci and Giorgio Chiellini, was good enough to handle them.

Switzerland and Spain did not attack much and were defensive throughout the match. Even though Spain tried to attack in overtime, it was not enough to beat the Swiss goalkeeper Sommer. Switzerland could not attack much as well. The match at points became monotonous and boring as it failed to generate much enthusiasm and the players played as if they were forced to play.

Spain’s attacks could have been better but missed a lot of shots. Switzerland was totally dependent on their goalkeeper and did not play as a team. That’s why Spain deserved the win because they had the spirit in the team even though they did not play at their best. I Hope, they play better in the next important round.

The match between Belgium and Italy was quite exciting and interesting as there were a lot of moments where both teams showed their power. The goal by Lorenzo Insigne (Italy) was awesome!! Belgium created a lot of chances but was very unlucky and missed all of them. Also, Italy’s defensive wall was extraordinary!!

One of the Belgian players who really shined in the match was Jeremy Doku. He was fast, agile and dribbled past the Italian defenders many a time. The Belgian defence was poor. They defended at times but were quite average. They failed to block the shots at the right time and eventually paid the price. Not to forget, Italy’s attack has been very strong in the recent past and won their last 30 matches consecutively. So the Belgians should have prepared for that and played accordingly.