Assam tennis scenario: A glorious past and a promising future 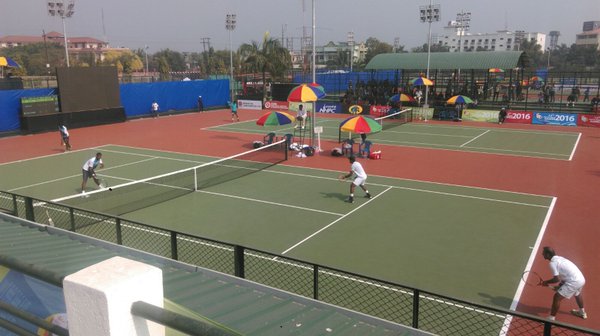 A view of the All Assam Tennis Association Complex, at Chachal in Guwahati

In the midst of mind-boggling strides of science and technology and the resultant development of visual media enabling us to witness scintillating sporting events of the world sitting at our drawing rooms, the promising performance of Priyana Kalita, a young under-16 Guwahati girl, has not drawn the expected euphoric  reaction from the  sports lovers. Priyana Kalita has emerged as the national champion in the ‘All India under-18’ women’s tournament organized by All India Tennis Association (AITA) held in New Delhi last year. As recognition of her talent and effort, Priyana Kalita has been awarded a prestigious scholarship by Miami University of United States. Further, Kristie Bodo, Andy Thowsen and Anchit Gogoi, all under-14 boys and girls have been performing exemplarily in the state and national tennis circuit. These positive developments auger well for the state tennis scenario.     It is felt that given the right coaching and encouragement, the youngsters of the State would perform better in near future bringing laurels for themselves as well for the State.

Not to speak of a casual follower, even for a regular follower and admirer of tennis, it would appear to be  interesting piece of information that Sivasagar Tennis Club was established way back in 1901, thereby making it older as a club than even Calcutta South Club, famously described  as the ‘cradle of Indian Tennis’.    Calcutta Tennis club was established in 1920. 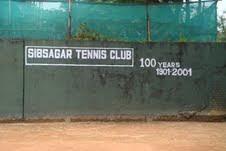 Sivasagar Tennis Club now located near the historic Borpukhuri (the ‘big tank’ made in 1734 in the memory of Ahom King, Swargodeo Shivasingha) continues to be a centre of attraction for the tennis admirers. It is largely due to the unflinching support together with their love and commitment for tennis displayed by some of the stalwarts, prominent among whom were late Girijananda  Baruah, late Parag Chaliha, and a host of others that Sivasagar Tennis Club has been continuing uninterrupted. In the year 2002, the Club had celebrated its centenary with much pomp and splendour.

Dibrugarh till the 70s, was the hub of sporting activities in Assam – be it tennis, badminton, football or cricket. Late Chandra Sarmah was one of pioneers in tennis not only in Dibrugarh but in the State as well. However, with the passing of time and with the shifting of activities to Guwahati, Dibrugarh Tennis Club gradually lost its glamour and fame.

India club in Guwahati, established in 1932, has been the nerve centre of Assam tennis promoting the cause of the game scrupulously and in a disciplined manner.  Highest tennis tradition is being maintained in India Club. The veterans congregate every day to play here unfailingly. With the passage of time, the stature and reputation of the club have grown across the country.   Members of the prestigious club comprise of ex-Assam players, public sector undertakings along with others with abiding passion for the game. Legendary Pulin Das, the quintessential tennis lover having played here   till his 85th year, remains one of the prized possessions.

The 70s decade saw a flurry of tennis activities in Guwahati. The legendary R G Baruah, characteristically, lent his helping hand by creating tennis infrastructure in Nehru Stadium in 1965. Famed coaches were brought under his patronage so as to attract and inspire the young talents.  Guwahati became one of the venues to hold circuit tennis and the tennis connoisseurs could watch live remarkable tennis from the likes of Nastase, Premjitlal and Joydeep Mukherjee, and the Amritraj brothers (Vijay and Anand) in the late 60s and 70s. The quality of Assam tennis at that stage had reached a quite high standard.

The North East Tennis Foundation with a huge complex having three numbers of clay courts near the Last Gate, Dispur, has contributed immensely to whet the appetite of tennis-aspiring boys and girls. Its prime location together with the availability of trained coaches has come as a boon for the enlightened parents who are keen to see their kids initiated to tennis. Established in 1991, the foundation has filled the void of lack of adequate tennis infrastructure in the fast developing Guwahati city since tennis facility as well as coaching provided at Nehru Stadium could not cope up with the increasing demands of the sports lovers of Guwahati.  Nearly, 160 young boys and girls are enrolled now in NETF who are being coached. NETF   holds a number of yearly state-level tennis tournaments. 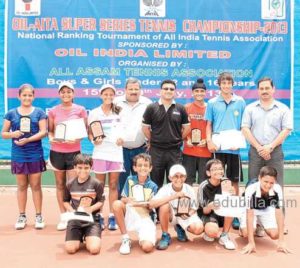 In consonance with the National Games held at Guwahati in 2006, the sprawling and massive All Assam Tennis Association Complex, at Chachal has been set up with amenities and facilities befitting international standard. The synthetic courts coupled with excellent lighting facilities in the backdrop of picturesque scenic beauty make the complex attractive and magnificent.  The ambience of the complex is tempting even to the uninitiated to the game of tennis.  Ever since its beginning, it has been coaching huge numbers of youngsters besides holding a number of All India Ranking and state level tennis tournaments of different age groups for both boys and girls.  Tournaments like AITA national ranking tournaments below 18, super series tournaments are the feathers in its cap. The office bearers of All Assam Tennis Association like Ankush Dutta, Swapnil Barthakur and others deserve commendation for their unfailing commitment to the cause of the game by enforcing discipline among the players and for upholding the sanctity of tennis.

Established in 1910, Jorhat Tennis Club has been in the thick of tennis activities led by the ever agile and enterprising Raktim Saikia who is a known man among sports fraternity both in Assam and also outside the state. As back as in 1939-40, Jorhat Tennis Club had organized ‘All Assam Olympics’ spear-headed by  the doyen of Assam sports, Sasha Prasad Barooah.  Endowed with a rich infrastructure, Jorhat Tennis Club has earned reputation in national and international tennis federations.

In the southern part of Assam, Silchar Tennis Club has been rendering pioneering service since 1944 established at the initiative of Late Satindra Mohan Dev. His son, Late Santosh Mohan Dev, former Union Minister, a tennis player of repute and a football referee once upon a time, had contributed immensely to this club. The adjoining states especially Meghalaya, Manipur and Mizoram invariably participate in the yearly tournament organized by this club.

We hope with the burgeoning interest in tennis evinced by the admirers and enriched facilities available now in the State, days are not far when our young talents will make us proud with their award winning performances.

Ganguly is a retired ACS officer and sports enthusiast. He can be reached at [email protected].