The polar satellite launch vehicle PSLV-C47 carrying the satellites lifted off from the second launch pad of the space centre at 9.20 am on Wednesday.

Singh tweeted, “Congratulations TEAM #ISRO! Once again, you have made India proud.” 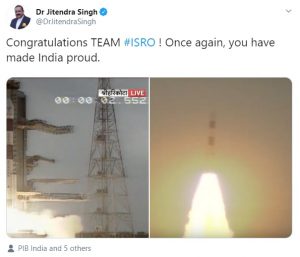 ISRO later stated on Twitter that all the satellites were successfully placed into their designated orbits.

“13 commercial satellites from USA successfully placed in their designated orbits,” it further tweeted.

The satellite will be placed in an orbit of 509 km at an inclination of 97.5 degree.

The thirteen commercial nano satellites were from United States of America which has been designed as a part of commercial arrangement with New Space India Limited (NSIL).