A-68 in Antarctica, the biggest iceberg of the world, may break away 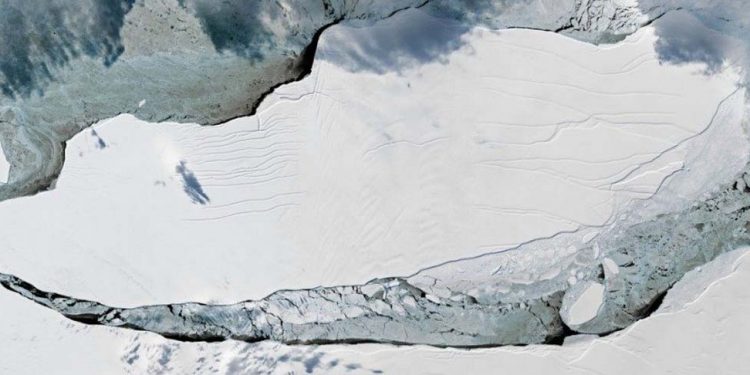 Is A-68 in Antarctica, the biggest iceberg of the world, breaking away?

The 5,100 sq km iceberg, weighing one trillion tonnes, is a free-floating block of ice in Antarctica. The name A-68 was assigned by the US National Ice Center.

The iceberg, which is as big as Sonitpur, Assam’s second-largest district, had broken away from the Larsen C Ice Shelf in July 2017.

According to a report on Thursday by Jonathan Amos, BBC’s Science correspondent, A-68m dropped a sizeable chunk measuring about 175 sq km.

The iceberg is moving north from the Antarctic Peninsula, the report said, adding that it has entered rougher and warmer waters. It may now move towards the South Atlantic.

The BBC report quoted British Glaciologist at Swansea University in Wales, Prof Adrian J. Luckman, who said new fracture could be the beginning of the end of the giant iceberg.

Prof. Luckman, who has been closely following the A-68 for last several years, said that he is amazed that something so thin and fragile has lasted so long on the open sea.

Report of Thursday’s split of A-68 came through the European Union’s Sentinel-1 satellite.

Prof. Luckman told the BBC that the final break-up of A-68 probably is now starting.

But slowly, the giant iceberg started to move northwards. Scientists are worried that A-68 is now caught in a motion-stress, and more splits in the coming months cannot be ruled out.

At present, it has travelled past the South Orkney Islands, and may further proceed towards the South Sandwich Islands.