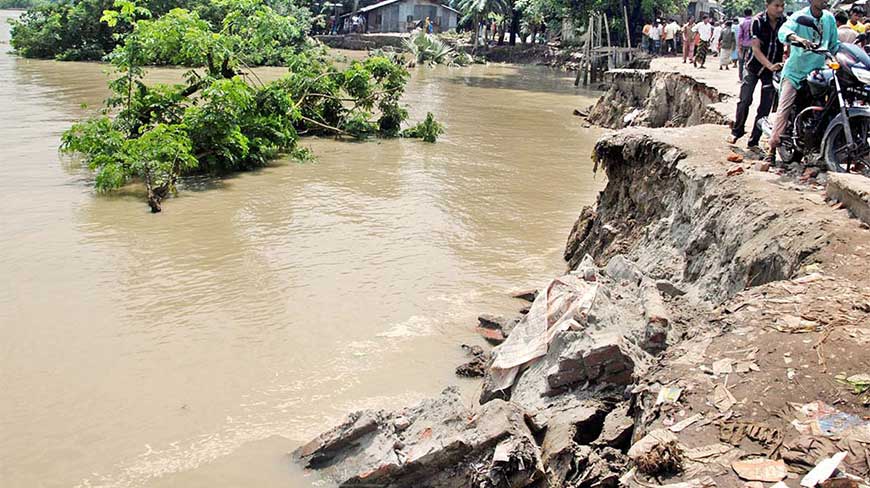 The Brahmaputra River has destroyed nearly 4000 km2 since last five decades at a rate of 80 km2 per year and erosion also wiped out more than 2500 villages affecting nearly 500,000 people.

Due to the river bank erosion and the channel migration, the Assam valley portion of the Brahmaputra River has lost approximately 7.4 % of its land area during its recent history of observations.

The river bank erosion has caused major human and economic disasters as the loss of land due to erosion is permanent and has a long term impact on the economy of the region and its people.

It has been now recognized as an admitted fact that enduring problems of flood, erosion and drainage congestion in the basin area of the Brahmaputra has created a decadal deeper impact in the socio-economic dynamics of the state.

As the river erosion is responsible for displacement of multitude numbers of people from their abode and livelihood, it has also becoming the root cause for intra-migration throughout the State. 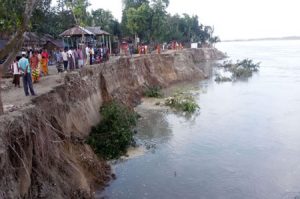 The greater issues of identity, rights on common property resources, land and shelter, ethnic conflicts are largely connected with the happenings of such intra migration in the state.

As assessed, the annual average loss of land is nearly 8000 Ha. The width of river Brahmaputra has increased up to 15.00 Km at some places due to bank erosion.

The surveys carried out at different periods reflect an alarming picture regarding widening of river Brahmaputra which is as follows:

The extent of damage due to bank erosion is alarming in nature which can be seen from the following table (as assessed by the Revenue Department):

The information received by a voluntary organization i.e. SSEDR(NE),  through filling RTI on 30th September 2013 has also  revealed many deplorable information regarding river erosion. It has been stated in that RTI reply that  the  then Kamrup District had 7,10,469 bighas agricultural land  out of which 16,552 bighas land  has been eroded by erosion in preceding  ten years. The informed statistics of the said district are as follow:

According to another  information published on 7th January 2014 in the Amar Asom,a vernacular daily from Guwahati ,the Assam Government  has confirmed that 70,650 people of 14 districts of the state have been residing in the embankment,roads  and other places continuously  for last thirty years  after losing their land and abode due to flood and erosion.Out of this populace 30,681 numbers  are male 22,645 female and 17,324 are child. (Source:Amar Asom,7th January,2014).

As per the report published in an another  Assamese daily, during 2012-13 the state lost around 13,314 hector agricultural land due to river erosion(Source:Asomiya Khabar,24th February,2014)

For understanding the impact of the river erosion particularly in the Brahmaputra valley we have conducted a field area survey in Kamrup and Marigaon District in the last year and got some erosion statistics of these districts.

During the field investigation we  also tried to collect statistics of the eroded land in various districts in the preceding years.We have also tried to interact with the people of Darrang, Kamrup and Marigaon district who have severely affected by flood and erosion.

Haricharan Rajbonghshi of Sipajhar informed us that though a large number of people have been affected by erosion in Darrang district but the district administration has done nothing to enlist those people as the beneficiary for various relief and rehabilitation as well as resettlement policies sponsored both by the state and central government. 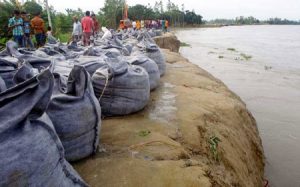 He has mentioned that only a few numbers of families in the district were identified to be affected in the entire Darrang district and the criteria of selecting the beneficiary was the condition of having valid land holdings of the affected people.  It means that the revenue department of the state does not account those people as the victim of erosion who doesn’t have   the valid land holding documents.

It has been observed that the Water Resource Department of Assam started taking measures for resisting erosion from the 2nd Five year plan onwards with primary emphasis on the protection of townships. These policies and strategies never embraced the interest of the rural poor who have been enduring the erosion problem since the great earthquake of 1951.

Many initiatives like river channelization and building embankments have not been able to produce the presumed results across different parts of Assam. The various schemes at work in the state of Assam like the Flood Management program and schemes under the North east council are mainly directed towards the flood relief, management and rehabilitation but none of the schemes have any focus towards the problem of erosion largely owing to the geological, geographical and ecological context of Assam.

A number of expert working in the flood and erosion issue of the state are of the view that one of the most important reasons of erosion is the construction of embankments in the rivers in the present day.

Hareswar Barman, a prominent political activist and social worker who has done a lot of work in his native district Kamrup revealed before us some important aspects of the river erosion and mentioned that the erosion affected displaced people of Assam never ever get any attention from the ASDMA (Assam State Disaster Management Authority).

The funds allocated under the Disaster Damage Repairing Scheme do not reach the erosion affected people. He suggests bringing into notice the situation of these affected people under the central and state governments while making mention of the erosion caused in the lower Assam by the rivers originating from Bhutan. Further he mentioned that the Government of Assam does not have any account of the number of displaced people in Assam especially in lower Assam. That is one of the reasons the affected do not get noticed by the civil society organizations or the media.

Barman suggests that this problem of erosion has to be investigated in an extensive manner throughout the length and breadth of Assam to find a substantial scientific remedy to the problem.Mr Barman states that the erosion created by the tributary rivers like Pagladia, Puthimari, and Dhansiri is quite different from the erosion of the Brahmaputra. He exemplified the positive outcome of the Puthimari river wherein evacuation of the river bed and 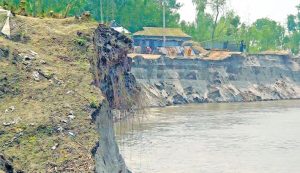 About 70 per cent of the total present day embankment system of the state was built from the mid-1950s until the end of the 1970s with a large setback distance away from the riverbank, in some cases, up to two kilometres. However, the construction of earthen embankments did not proved to be a systematic scientific measure considering the geological, geographical and ecological context of the state of Assam.

Though in many tributaries, the embankments   became a hindrance to prevent the flowing of silt to the wide floodplains and riverine wetlands during annual floods when floodwater overflowed banks. As a result, the continuous deposition of silt within the river beds and floodplains within the embankments reduced the effective flood flow area and conveyance capacity of the rivers.

This became the root cause of massive erosion in every river of the state and the situation becoming more aggravating after the earthen embankment system became structurally vulnerable.

This is the need of the hour to revisit the erosion problem with proper scientific investigation and good will. If the state cannot solve this enduring problem with sustainable means then more intensified conflict and calamity over land will appear in the near future.