Right to a decent burial: Death from inevitable conclusion to terrifying phantom 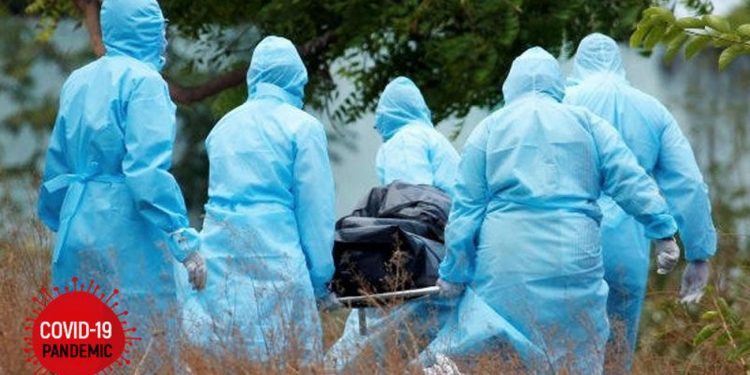 We are all conscious of the health and economic crisis the novel coronavirus presented us with. But did we ever in our wildest dream think that even death during a global pandemic will be a matter of controversy and stigma? Yes, you got me right; the coronavirus pandemic has created a crisis even in the final journey of humans.

As a daughter who lost her father a year ago and performed the funeral rites, I can empathize with the families of people who died due to COVID-19 and their mental state when there arises controversy with the burial or cremation of their loved ones. Their beloved who expired are stigmatized and are to some extent deprived of the right to a decent burial.

The funeral rites of those succumbing to COVID-19 have been an issue of controversy in China, Sri Lanka and even in India. There’s a common belief that dead bodies pose a major risk of disease, which leads to a false sense of fear during epidemics or pandemics. From black death to the Spanish Flu to last year’s Ebola outbreak, there has been a lot of speculation revolving around the burial or cremation of dead bodies.

The World Health Organization (WHO) issued elaborated guidelines during the Ebola outbreak in Africa, with regards to disposal of dead bodies. In case of COVID-19 the novel coronavirus transmits from one person to another through droplets. So, theoretically novel coronavirus can transmit during preparing the body for burial.

However, in the case of cremation, the ashes don’t present that risk. In China those dying of novel coronavirus became more like a ‘state property’. China decided to cremate the bodies and in many cases, the bodies of COVID-19 patients were cremated immediately after the death in the absence of family members oblivious of religious belief.

China’s national health commission issued a formal order on February 2, directing the local authorities to immediately cremate bodies of COVID-19 victims even if the family refused to comply with the orders. In Sri Lanka, the government made cremation of dead bodies mandatory. The order was resented by the Muslims, but the government urged them to keep aside faith and give precedence to the infectious nature of coronavirus.

In Italy, COVID-19 has denied dignity to the dead. The virus is preventing families of the chance to say a final goodbye to their loved ones. An emergency national law has banned funeral services in Italy to prevent the spread of the virus. This is unprecedented for a country with strong Roman Catholic values.

During the Plague 1348-1350, the dead bodies were buried on separate lands because the fleas or lice present in dead bodies could transmit sickness to the living. According to William Maitland in his History of London, 1756, the Bishop of London bought a property called “No Man’s Land” to bury the victims of the plague. When this area was filled up, as the number of dead bodies surged up, a local landowner purchased a 13 acre property for burial.

Thus the communal burial spaces were gone where the living and the dead co-habited. The 1918-19 Spanish Flu killed around 30-50 million people worldwide, affecting approximately one-fifth of the world’s total population. The numerous deaths overwhelmed the gravediggers and there was acute shortage of burial plots and caskets.

Corpses remained unburied at home as families waited for coffins, while hospital morgues exceeded capacity. During the Ebola outbreak in West Africa, it was not the number of dead that altered the burial rituals but the nature of the virus itself. Ebola was a highly contagious disease and direct human contact after a person’s death increased the possibility of transmission.

Traditionally, the burial customs in West Africa involve family members bidding farewell by washing, touching and kissing the bodies of dead loved ones. The WHO estimated that at least 20 percent of new Ebola infections occur during burials of deceased Ebola patient. And moreover it was believed that the patient zero in case of Ebola transmitted the virus to others during a burial in Guinea.

The WHO along with the International Federation of Red Cross and Red Crescent Societies (IFRC) and other NGO’S and religious groups came up with protocol for dignified burial of the dead with regards to the infectious nature of the virus and family sensitivities.

On May 22, 2020 the Bombay High Court held that Right to a Decent Burial is a facet of the right to life. The decision was based on a petition filed by the residents of Bandra, Mumbai claiming that there was a high chance of contamination of bodies of these patients are buried in cemeteries close to residential area.

A division bench of chief justice Dipankar Dutta and S.S Shinde dismissed the petition and said that there is no scientific proof to support the apprehension that novel coronavirus could spread through corpses. The court held that novel coronavirus is not air bound, and hence transmission of the virus from burial ground to people living in the vicinity is not possible.

The Bombay High Court’s decision falls in line with the decision of the Madras High Court in April, which said that Article 21 of the Constitution of India also entails the right to have a decent burial. The decision of both the courts falls in line with the exhaustive interpretation by the Supreme Court of Article 21. Article 21 of the Constitution of India guarantees Right to Life and Personal Liberty and such a right are beyond animal existence and encompasses a wide range of rights which ensures a dignified existence of people in the country.

The right under this article is available not only to a living man but also his body after his death. The people of India would strive to provide fraternity to all its citizens, assuring the dignity of the individual echo the ethos of the founding fathers of our Constitution. The Bombay High Court while dismissing the petition quoted Oscar Wilde: “Death must be so beautiful. To lie in the soft brown earth, with the grasses waving above one’ head and listen to silence. To have no yesterday, and no tomorrow. To forget time, to forget life, to be at peace”.

The underlying reason for the verdict was based on the World Health Organization and various medical institutions claiming that SARS-COV-2 is not an airborne disease. The Ministry of Health and Family Welfare (MHFW) also issued guidelines on dead body management. The guidelines state that the cause of transmission is through air droplets and thus there is no probable risk of transmission from a dead body to others.

The guidelines also permit relatives of deceased to see the body, with total restrain on physical contact with the dead body. There is no scientific evidence that novel coronavirus can transmit through corpses unlike Anthrax, in Siberia, the source of which was a dead body of a reindeer which had failed to decompose. But then again the geography and the nature of India and Siberia are different, so the decision laid down by the court takes care of public health.

There have been incidences of denial of right to decent burial since last few months in the wake of the pandemic and a false sense of fear revolving around citizens. For 36hours, body of a popular Meghalaya doctor wasn’t given a resting place and his body lay in the hospital which he had founded nearly two decades ago.

In Madhya Pradesh an elderly COVID-19 patient was chained to a hospital bed and in Puducherry, a dead body being thrown in a pit for burial is enough to shock the conscience of a country, where human dignity is a core constitutional value.

We have seen enough fatality since last few months and also saw the effect of a pandemic on society, physically, mentally and economically. We can take some lessons from Ghana where funerals are an occasion for celebration. The social media was taken by storm by the videos of six pallbearers dancing while carrying a coffin and the origin of these videos is a tradition in Ghana where Ghanaian families hire them to send their loved ones with pomp and style.

Death is regarded as a homecoming and therefore it is celebrated. The people dying due to COVID-19 shouldn’t be stigmatized and be sent to the heavenly abode with honor. Death is the Modus Vivendi and thus any stigma and discrimination attached to death be it natural or dying because of a pandemic shakes the root of the Indian Constitution.

Different burial ground for people dying due to corona virus is a violation not only of Article 21 but also of Article 14. Had there been any scientific data that the cadaver of COVID-19 patients carry the virus, the discrimination would have been reasonable, but with no scientific proof, discrimination only on apprehension of fear or panic is not justified. Let us spare death from the clutches and complexities of human criticism and chaos. Let death be a peaceful sojourn.