Celebrated on Maghee Purnima tithi, Maico Chumphai is a religious-cultural festival of the Tai Buddhist communities 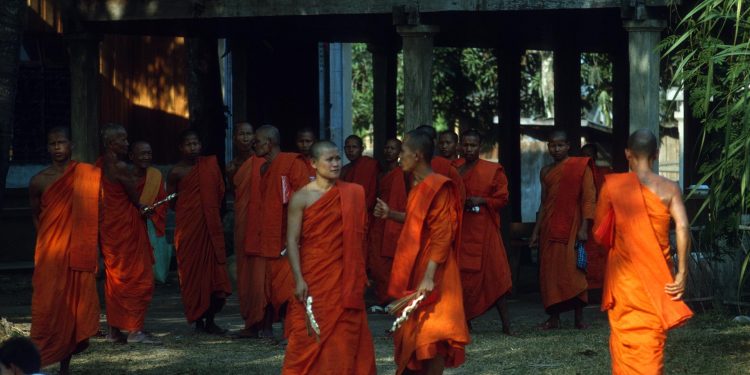 One can notice flurry of activities in the Tai Buddhist villages of Assam, particularly among the young boys and girls, after Bhogali Bihu. These ten to 15 days have been a busy period for the village youths fetching woods, drying them up and erecting a towering meji. On the Maghee Purnima they celebrate Maico Chumphai, one of their important festivals.

The day is called Maghee Purnima because it is a full moon day of the lunar month Magh, which generally falls in January—February.

On this day, the Tai Buddhist— monastic and lay— assemble in an open field and burn a high towering meji (of at least fifteen feet high) made of straws, bamboos, and woods. The height of the meji indicates how long time the community has spent in preparing for the event before it is celebrated.

“Our village youths prepare for this festival at least 15 days before the event. They collect woods from the nearby hills and dry them up to erect a solid and high towering meji. Their verve never fades when it comes to this occasion. It surely is a mark that the village youths are still anchored to their culture and tradition,” Ananta Turung, an elderly person of Pohukatia village in Titabor, said .

This, however, is not a ceremony for the youths only. People of all age-groups also participate and play their respective roles in this event.

Then, the youths must make sure that they finish erecting the meji two days before the scheduled day. For, one day before the day of Maico Chumphai, the village community assembles in the vihar or monastery in the evening.

As the chief monk and other monks chant mantras, they join hands and pay homage to and seek blessings from them. The devotees offer alms, flowers, and sky lantern or Phom phai (or Bomphai in Tai Turung) to the monks.

Then the chief monk releases the first sky lantern which is followed by several others by the devotees. The flying sky lantern gives a serene look to the awakening night sky of the Assamese spring that often attracts the people of other traditions. In many cases, the young boys spend the night in their hard-built meji which provides them a temporary night shelter.

The next day, in the morning the villagers gather in the open field where the meji is built. The monks stand in front of meji when the devotees stand facing them. As the beginning ritual of the festival, the monks chant mantras.

Then an elderly man with permission from the monks set fire on the meji. As the meji is burned off, the village folk eat khoyako, a special hotchpotch prepared of rice, various types of vegetables and leafy vegetables (some of them mix meat and fishes as well).

In the cultural front, the festival has a close affinity with the Bhogali Bihu of the mainstream Assamese celebrated during the end of Puh and the beginning of Magh of the lunar calendar (in January).

The practice of erecting and burning meji is common in both traditions save the time of celebration. Then the ritual is not only deeply rooted at the cultural level, but it also mirrors a religious significance in Tai Buddhist communities of Assam.

There is a popular belief in them that the Buddha declared his parinirvana day on this day. That he would leave his mortal body on the full moon day after three months from that day. Thus Micho Chumphai is celebrated to mark this great historic event of the Buddha. Again, khoyaku, the special food that they take on that day has a deep root in their Buddhist faith.

Their belief goes that the Buddha was sick for sometime before his parinirvana. This concerned his disciples very much. Worried, they tried their best to get their master back to his health. Hence they prepared food for the Buddha by boiling rice with a lot of vegetables so he got sufficient nutrition.

Moreover, for a Buddhist monk like him, who partakes of solid food once in a day, it was necessary to take nutritious food to sustain weakness. This was the reason behind adding plenty of vegetables with rice. The Tai Buddhists are still keeping alive this belief of healthy food through khoyaku.

Maiko Chumphai sends out this message that our festivals have a deep root in our faith, belief, and in our ways of life. Under the veil of the rituals, meaningful or trivial, they have some rationales that can only be discernible to us when we are willing to accept the diversity in beliefs and the ways of life.