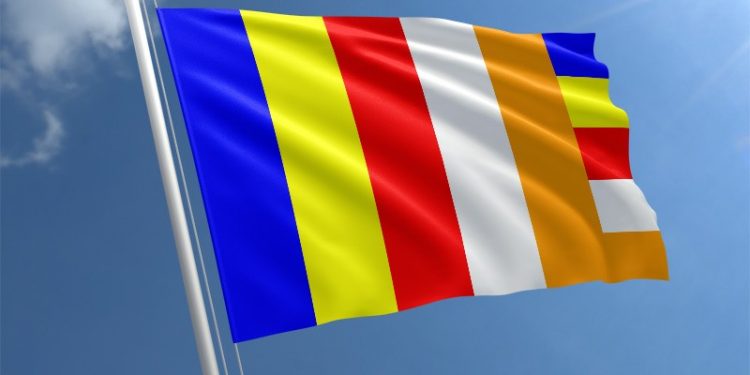 For any Buddhist in the world, perhaps there is not any day as significant as the Buddha Purnima, a full moon day on which the Buddha was born, attained enlightenment, and left his mortal body.

It is a very unusual case that a man’s three important events fall on the same day! This happened to the Buddha and hence this day is also known as the thrice blessed day.

The Buddhists across the world commemorate this day performing puja, dhamma discussions, chanting suttas, offerings, receiving silas, and other rituals. Apart from all these activities that constitute the spiritual aspect of this great full moon day, the day has a unique aesthetic aspect. Yes, it is one of the days when the vihars and monasteries wear a colourful look. This look, however, owes much to the Buddhist flags, which are strung in diagonal lines in monasteries or vihars.

The Buddha, whose chief concern was to remove suffering from human life, never encouraged any practice that is not helpful to the attainment of a calm mind. Hence the use of the flags during Buddha Purnima has a deep significance over and above the magnificence it appends on the event.

Buddhist flag is a rectangular piece of cloth of the colours blue, yellow, red, white, orange, and a mixture of all these five. A symbol of faith and peace, the Buddhist flag is used to represent the Buddhist faith. Though controversy prevails regarding who designed the flag, it is believed to be invented by Henry Steele Olcott, a retired American Army Colonel to Sri Lanka, in 1880. And the flag was first hoisted on May 28, 1885, during Vesak Poya day (Buddha Purnima in India) when the British rulers declared the day as a public holiday in Sri Lanka.

As the legend goes, during the first week after enlightenment, the Buddha sat under the Bodhi tree deeply experiencing the joy of freedom and tranquility. His mind was calm and blissful and thus free from all sorts of disturbing thoughts. In the second week, he sat in gratitude to the tree that sheltered him during his struggle for enlightenment. In the third week, through his mind’s eye, the Buddha saw that the gods were not sure about his enlightenment. The Buddha then built a golden bridge in the air and walked up and down for a whole week to prove the power he attained. In the fourth week, he created a jeweled chamber where he meditated on what was later known as Abhidhamma. At that time, his mind became so purged and serene that six colored rays, viz., blue, yellow, red, white, orange, and the combination of all these five colours emanated from his body.

The practice of meditation and experiencing colours have a meaningful connection. A meditation instructor is often heard to ask the practitioners, ‘what colours have you seen?’ For the colour relates to a specific chakra or energy center in the body and hence the colour one sees during meditation reflects which element is acting most on him.

Thus the emanation of the colours from the Buddha’s body right after his enlightenment indicated briefly the sort of the teachings that the Buddha would be giving out to humanity. And the use of the flags during Buddha Purnima could be said to be the devotees’ keenness to receive the aura of the ‘all goodness’ that the colours of the flag symbolize.

Ramala Sarma is Assistant Professor in the Department of Philosophy in Nowgong College. She can be reached at: [email protected]