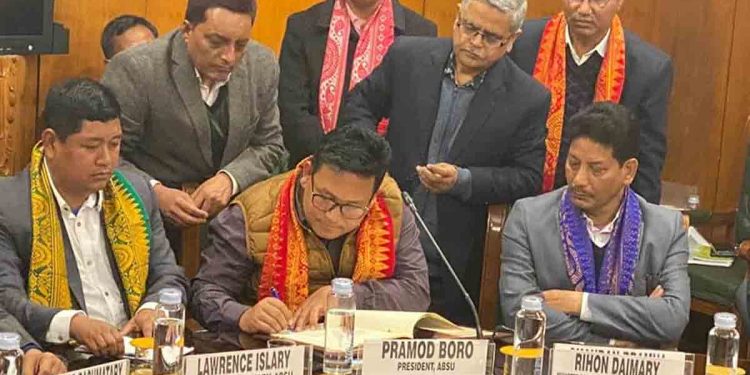 For over three decades the Bodo heartland witnessed mushroom growth of militant groups armed to the teeth indulging in the cult of guns and bombs, killings, bloodshed and extortion while raising a plethora of demands. In a span of 27 years, three accords were signed by the Centre and the Assam government with various armed outfits that took to armed rebellion against the government. With different armed outfit making different demands, the list of demands appeared to be confusing at times.

However, amidst all confusion the toughest nuts to crack pertained to two demands – the demand, off and on, for sovereignty by some groups and the demand for statehood virtually by all groups. Most ludicrously, many armed outfits of the Northeast, including even those who, as a rule, are always on the run for their dear life, indulge in the foolery of demanding sovereignty as if sovereignty is an item available in the government godowns for a price.

While right from the word go, the Centre has made it clear as daylight to all outfits that sovereignty was non-negotiable; the demand for statehood continues to raise its head directly or under various guise in the arena of insurgency.

In this respect the Bodo heartland has always been in the forefront. The last three plus decades hold testimony to the thunders on sovereignty that resounded across the soil of the Bodos.

As has been pointed out by this writer in one of his earlier columns, it may be pertinent at this stage to state again that in the second half of November last year, many of the signatories to the latest and the third Bodo Accord reiterated the demand for separate Bodoland at a massive rally held near Balipara in Sonitpur district in north Assam.

With the passage of just over two months, along with many other leaders of armed outfits, the very leaders who demanded statehood signed the third Bodo Accord. Now that all signatories to the accord have agreed to peace and to shun armed movement for all times in lieu of massive economic and seemingly territorial bonanza offered by the Centre, technically and logically the demand for Bodoland statehood has to be dropped perpetually.

So far as enlargement of territory is concerned, the Union Home Minister Amit Shah’s statement that the area of BTR might be enlarged need to be read between the words and syllables and not just lines.

Again, while the word ‘Region’ in BTR has a strong territorial connotation and undercurrent, one may not be off the track in assuming that the Centre, purposefully or inadvertently, has flung open the gate for resurfacing of the demand for Bodoland state.

While it may be too early in the day to assess if the armed outfits who are a party to the third Bodo Accord or those who had signed the earlier accords or a mixture of them could possibly raise the statehood demand, there is no guarantee that more outfits armed to the teeth would not take birth in the Bodo heartland in the days to come and take to armed revolt while demanding for a separate Bodoland state.

So far as the Centre is concerned, an analyst may look at the issue from two different angles. If the Centre adopted a casual and nonchalant approach in the use of the word ‘Region’ or agreed to the change without any thought, it might have simply been akin to madness without method.

What may be of greater concern is the thought if it was a meticulously designed roadmap with a view to grant statehood or Union Territory status to Bodoland is the not too distant future. History holds testimony to the fact as to how the states of Nagaland, Meghalaya and Mizoram were carved out from territories earlier held by Assam.

Meanwhile, all the three accords make it crystal clear that peace could be purchased by means of offering huge bonanzas to the Bodo belt. In the backdrop of such bought peace that have proved to be non-lasting hitherto, one may not go haywire in guessing that if a separate Bodoland state or Union Territory is granted, the present day Assam may be forced to lose possibly the entire north bank of the Brahmaputra.

Going down the memory lane, it may be recalled that a rally organised in Guwahati nearly three decades ago by several Bodo organisations rent the air of the city with slogans like “Divide Assam 50/50”.

Further, so far as the peace factor is concerned, all the outfits who have signed different accords at different times while agreeing to shun violence must shoulder a much higher degree of commitment now towards upholding peace.

At this stage mention may be made that the election to the BTC is seemingly less than two months away. With power politics having become the backbone and ethos of the political and electoral system in India, degeneration and decadence have set in with accelerating momentum in the body politic, more so in the electoral arena.

The result being that money power, muscle power, arms power and such anti-people forces have come to stay, causing the electoral landscape to turn gory with violence, bloodshed, arson and the like while significantly influencing the final election results.

The upcoming polls to the BTC is likely to witness much keener and tougher contest than ever before for the simple reason that the new groups of Bodo militants who joined the mainstream may also take their plunge in the electoral fray if one is to go by the ethos of Indian politics which centres around making way to the corridors of power.

Even psychologically speaking, it may be argued that having savoured and relished power among the masses by brandishing the gun, the militant-turned-mainstream leaders, in all probability, are likely to go for the power game through the ballot.

Hence, the contest may increase many-fold between the armed rebels who surrendered earlier, signed the second accord and are presently running the BTC government and the NDFB groups who were signatories to the third and latest Bodo Accord.

Irrespective of which of groups contest the approaching BTC polls, all militant-turned-mainstream leaders and organisations are duty bound to ensure that peace prevails all through the polls.

Overcoming the undemocratic ethos that rules the roost in the political and electoral sphere in the country, these leaders have the sacred duty of putting the greater interest of the Bodo heartland way above their petty political interests. They must strive towards ensuring huge gains for BTR by maintaining peace and according secondary importance towards their individual interests. A tough calling indeed!

The BTC polls held hitherto also witnessed violence, at times on a large scale. However, unlike the earlier accords which miserably failed to pave way for lasting peace in the region, the upcoming BTC election calls for peace with much greater thrust.

The way the English proverb states “Morning shows the day”, similarly what the latest Bodo Accord holds for the state in terms of peace can definitely be gauged to a significant extent from the BTC polls – whether held peacefully or rocked by violence.

Thus the BTC polls may serve as a litmus-test on peace for the post-accord era. It now remains to be seen if the Centre, the Assam government and the militant-turned-mainstream leaders can uphold Prime Minister Narendra Modi’s statement on the latest Bodo Accord as “a new dawn for Assam”.