Valentine’s Day: At least a day for Love

Understanding the meaning of love is impossible without practice 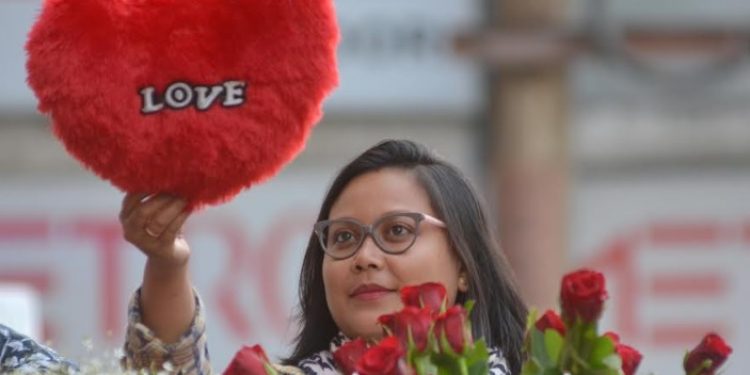 In Kundan Shah’s Hindi drama film Kya Kehna (2000), perhaps it is the most painful scene when the pre-marital pregnant teen Priya, the lead character, stood helplessly amidst the hostile audience in the annual college function begging a few minutes to speak up her mind.

It took her a lot of nerve to get the permission of the Principal to address the audience as all her classmates, fellow students, teachers, guardians, and members of the managing committee started shouting at her and showed their disapproval strongly.

Her fault was she was carrying the love of her boyfriend who was reluctant to give the name of their relationship and refused to take responsibility for the baby in her womb.

Priya, thus, was fallen in their eyes. Unwed motherhood being always heavily stigmatized, Priya’s love thus could not attain that height to get sanctified by the social taboo.

Taboos being imposed by social institutions, inter-caste love, inter-religion love, love between two unequal social classes and the like have often been eyed disgracefully. Consequently, unlike Priya, who is strong enough to raise her child as a single parent, many girls (and boys as well) succumb to the rigour of social taboo.

Then, once the love-bond is certified by society, we get to see the reverse side of the story. The love that was once formidable now becomes comforting; the wedding that was once a challenging burden now becomes a cause of happy celebration; the baby once declared sin-borne now becomes love-borne; the pregnancy that was once a matter of shame and contempt now becomes the greatest blessing of God. And the people who were once nit-pickers now become concerned guardians.

Priya said in the film, ‘If I were married, how much care I would have got from you all. You would have said, do not do this, it will harm the baby. Do this, it is good for your baby…..’ It did not happen to Priya because her partner was not ready to take responsibility of their love, even though it was a joint venture of their youthful madness.

Regrettably, Priya had to pay price for her craziness all alone. Here, craziness, in spite of being an inherent nature of a teen, is censored!

But, it is encouraged in the case of the wedded couple who plan for a child. Yes, the medical specialist would suggest to them an impulsive love, which will even make them forget what they are aspiring for.

A very unregulated love is prescribed to them. For, it would lead to the fullness of a family without which the legacy of the family cannot be carried forward. Again, it will save the couple from facing the spiteful social taboos like the prohibition of the childless couple from participating in some auspicious social functions (!)

The sort of love one will enjoy is more often than not subject to the untold rules of society. In Platonic ideal society, passionate love, family, etc. were meant for the artisans only. These were not allowed to the upper two classes— the philosopher-king and the warrior— who were supposed to discharge their duties without distraction often caused by their attachment to family.

The 3rd CE Roman society also saw apathy to love and marriage from Emperor Claudius II who reigned Rome during that time. As the legend goes, he was called Claudius the Cruel because of his tendency of getting into wars and exploiting people. As he got into wars excessively, he needed many soldiers. But he did not get enough of them. For, most of the young men were not interested in joining the army as they were deeply attached to their loves and families.

Claudius then outlawed all love, engagements, and weddings in Rome. This harsh act just shattered the matrimonial hopes of many lovers and couples. It is at this time of crisis in the love-world of Rome that St. Valentine, a Christian priest, stood up for love. He secretly performed clandestine Christian weddings for young lovers.

This succour to loves, however, did not last for long. For Claudius came to learn about it and ordered that Valentine be beaten up and put to death. As Valentine was waiting for execution, he fell in love with the blind daughter of the jailor. Though it was a very brief romance, the legend has it that it left an intense effect on her who could see later and read his letter signed with ‘From your Valentine’. St. Valentine’s self-sacrificing commitment to love is commemorated on 14th February as Valentine’s Day, a day of love and romance.

Understanding the meaning of love is impossible without practice. Its practice, however, is tougher than anything on earth. For on the face of all odds that our life throws on us, it is not easy to embrace the other even as being in self. It is a difficult practice of feeling the joy of receiving in endless giving.

Today though I smirk at the flamboyant Love Day celebration by youngsters with symbolic icons like heart-shaped candies and pressed flowers etc, I give in them thinking this divine feeling be continued in any form until it is realized fully and truly. Till then, no Priya be the victim of any social taboo and no life is ended for love.