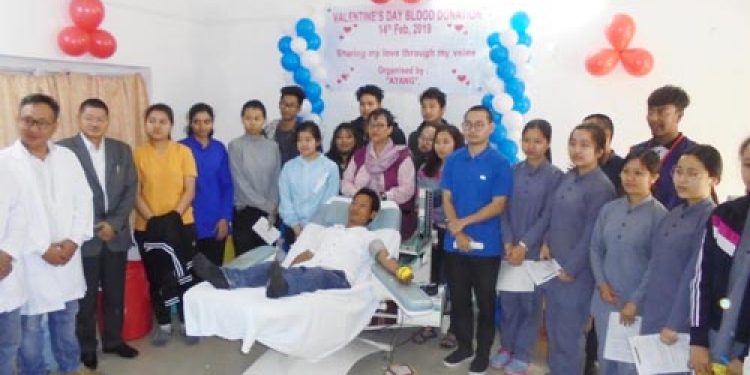 The founder chairman of the NGO,  Aini Talo, who supervised the camp, said they are doing the service to enrich the blood banks in order to save lives.

The NGO with its theme ‘Be a hero this Valentine’s by sharing your liquid love’ encouraged the healthy youths for rendering yeoman service by voluntary blood donation.

East Siang Joint Director of Health Services (Training & Research) Dr D Ronya, who attended the programme, appreciated the efforts of the NGO and exuded his confidence that such health services would save many lives during medical emergencies.

The young students from Pasighat College of Horticulture & Forestry were spearheading the blood donation programme this time. One Tayin Taloh of Ledum village in East Siang was marked as first blood donor of the camp, who was followed by more than 55 college students and local youths.

Aini, who is popularly known as ‘Ayi’ (mother) along with her volunteers at the forefront of voluntary blood donation in the frontier state.

She has been awarded with ‘Centurion blood donor of FBDOI (Federation of Blood Donor Organisation of India)’ awards from Government of West Bengal during June last year, for contribution in blood donation activities.

Taloh has been conducting voluntary blood donation camps for years now, and has so far donated around 25 times. Apart from organizing regular blood donation camps in Pasighat, Aalo and capital city Itanagar, the NGO volunteers respond to emergencies when blood banks run out of blood.

Aini has achieved success in busting the myth that women cannot donate blood. She sometimes organized all-women blood donation camp and taught the women that  one can donate blood only after doctors certify that one is physically fit to do so.