Once TB afflicts a tea worker or a member of his/her family, the routine and regular economic hardship turns life into a nightmare for the entire family 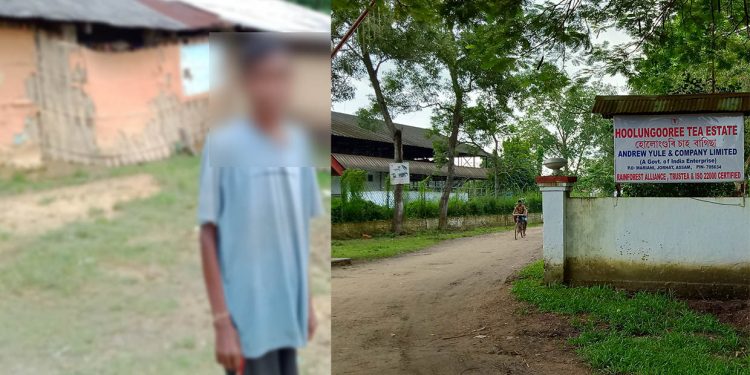 A tea garden worker and a garden in upper Assam.

Over the last one month or so, 35-year old Ajay Kandha has been suffering from cough and physical weakness. Being a tea worker, his duty is to pluck leaves in the tea garden. However, for last few days, shortly after getting down to his task of plucking leaves, Ajay would get tired because of his physical weakness.

Yet the greenery that spreads to the distant horizon and his attachment to the tea garden has prevented his spirit from being dampened. However, although at times he would desire to have some rest because of his weak health, he would not dare to do so because of the strict vigilance of the sardar (supervisor).

Ajay is a worker at Narayanpur Tea Estate located on the outskirts of Dhekiajuli in Assam’s Sonitpur district. Along with his wife and four siblings, Ajay resides at a ‘line house’ of the tea garden.

As twilight breaks into dawn, Ajay and his wife would rush out of bed, speedily complete the needful household work, have an early meal and make way to the heart of the garden to begin the daily task of plucking leaves. Having laboured the entire day in the alloted task of plucking tea leaves, the duo would reach home on the eve of sunset.

By then Ajay would be an extremely tired person with his energy level at the rock bottom. With a view to forgetting his tiredness, he would often consume a pack or two of country liquor prepared at a nearby residence. This indeed is the daily life-style of Ajay.

However, one fine morning things suddenly turned for the worse. Despite all attempts, Ajay could not get up from bed. The already existing cough turned severe while his temperature soared. The painful sight of the agony suffered by Ajay was tortuous for his wife Reshma and she was lost in the sea of utter helplessness. She could not decide whether to leave Ajay at home in that state and leave for work or to take her husband to the hospital.

The reason for the dilemma was simple. Reshma is  a faltu (temporary) worker in the garden. Abstaining from work would mean loss of daily wage. The pertinent question that surfaced as usual at this stage was as to how to manage the affairs of the family without even a day’s wage.

Finally, with the help of a youth residing at the neighbour’s residence, Ajay was admitted to the garden hospital. While for the first two days the youth gave company to Ajay as attendant, the real problem arose from the third day onwards. As the young boy could not be expected to serve as Ajay’s attendant on all days, there appeared to be none to give company to the patient from the third day onwards.

Reshma faced the same dilemma; if she were to miss work and attend to her husband in the hospital, the wages would be missed and the family would starve.

Meanwhile, a test conducted on Ajay’s sputum established the fact that he was suffering from Tuberculosis (TB). In order to avail better medical treatment, the tea garden hospital doctor advised that Ajay be admitted to Tezpur Medical College Hospital, located about 20 Km away from Narayanpur TE.

Once again Reshma faced the earlier problems but on a much larger scale. The problem was mainly economic. Where from would she get the required amount of money to shift Ajay to Tezpur? Who would serve as Ajay’s attendant in Tezpur?

Such questions and a host of related issues left Reshma sandwiched between the devil and the deep sea; answers to the problems appeared to be completely beyond her reach.

Unfortunately, this is not just the sorry plight of a single pair of husband-wife among the tea community members. The bitter reality is that such problems are confronted by an overwhelming majority of such families engaged as workers in the tea gardens.

A large section of the tea workers is being afflicted by TB. Once TB afflicts a tea worker or a member of his/her family, the routine and regular economic hardship turns life into a nightmare for the entire family.

While savings is an alien factor in the life of a tea worker, the day-to- day affair becomes unmanageable even if a single day’s wage is to be forfeited. The situation turns still worse if the patient tea worker happens to be the sole earning member in the family.

Further, even when a tea worker avails treatment for cure of TB, the virtually zero economic condition forces the family to undergo a fiery ordeal amidst mounting misery and despondency.

Although treatment for cure of TB is rendered free of cost at government hospitals, still a good deal of incidental expenditure has to be borne by the family of the patient. Transportation of a TB afflicted tea worker to a government hospital (where treatment for TB is available) in the town/city is an immensely costly affair for a tea worker’s family. It is more so if such a hospital is located far away.

Again, it is not just the cost of shifting the patient to a town/city hospital that matters alone. Almost as a rule, attendant(s) must accompany the patient. And hence, the cost of transportation of such attendant(s), his/her/their lodging, food and the like involve quite a sizeable expenditure to be borne by the family of the patient. Again, if the said attendant happens to be a tea worker, he/she stands to lose wages.

Quite often financial hardship becomes a huge road block, preventing a TB afflicted tea worker from being shifted to a town/city hospital.

It may also be noted that although government hospitals provide free service in the matter of spit/sputum tests and X-Ray, yet for CT Scanning and MRI etc the patient’s family has to bear the expenditure. On this count, almost as a rule, a tea worker’s family fails to make any further progress in the matter of treatment.

Again, on numerous occasions, the desired results are not obtained from tests carried out in government hospitals. This means that such tests are to be conducted in private laboratories. A penury-hit tea worker’s family generally cannot avail this option.

It is almost common knowledge that a TB patient needs to take nutritious food but being entrapped in financial strangulation because of extremely poor wage structure laced with harsh rules, such requirement is as good as a distant dream for a TB patient engaged as a worker in a tea garden.

Under ‘Nikshay Poshan Yojana‘ of the government, a TB patient is paid Rs 5, 00 to consume nutritious food. However, more often than not, extreme economic hardship compels such TB afflicted tea workers to spend the amount on other pressing household necessities.

Further, lack of education only adds to the woes of the poor tea workers. With the four boundaries of the garden comprising their world, these tea workers have nil or very little contact with the outside world.

As a result, if they are to go to a town/city hospital, they are all at sea as to how to approach a doctor or a concerned department. Economic hardships compounded with lack of education have exerted such a negative impact on their mental make-up, that they cannot muster the guts to ask someone for the necessary information at a hospital.

On the other hand, many doctors and health workers are reported to adopt an attitude of neglect towards tea workers because of their social background.

In one word, the existing working condition in the tea gardens has reduced the life of the workers to a routine system bereft of any ray of future hope. Very many of such patients of the tea community prefer to bear the sufferings even at the cost of their life rather than go to a hospital for treatment. They are virtually compelled to meekly surrender to the blind force of destiny.

(This story has been written as part of REACH Media Fellowship, 2019.)