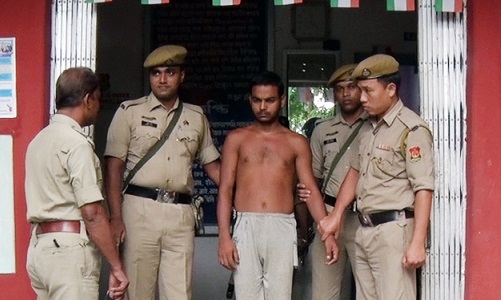 Shyamal Nath, who was arrested by police in Panisagar area under North Tripura district on Tuesday. Image - Northeast Now

One youth, identified as Shyamal Nath, has been arrested by police on charges of killing one 70-year-old vegetable vendor Md Abdul Kadir with a sharp weapon after an altercation at Panisagar area in North Tripura on Tuesday.

Reportedly, the incident took place on Tuesday morning on when the deceased Md Abdul Kadir, a resident of Rohua Ward No 2 under Panisagar Sub-Division came to meet the father of Shyamal Nath for collecting vegetables, but he was brutally attacked by Shyamal.

“After attacking Md Abdul Kadir with a sharp weapon, Shyamal disappeared and the former later succumbed to his injuries on the spot,” said sources.

As per police, Sivashini Nath, Shyamal’s mother, has confessed that her son had killed Kadir following an altercation.

Sub-Divisional Police Officer (SDPO) Rajiv Sutradhar stated, “Md Abdul Kadir, a vegetable vendor, had a good relationship with the family of the accused, Shyamal as Kadir had been collecting vegetables from Krishna Charan Nath, Shyamal’s father, since long. However, over what issue an angry Shyamal killed him is yet to be known.”

A case (No 40/2018) was filed at Panisagar PS in connection with the killing and police arrested Shyamal under Section 302 of the IPC from the spot on the basis of Shyamal’s mother’s statement as a witness of the crime.

However, police are investigating into the case.