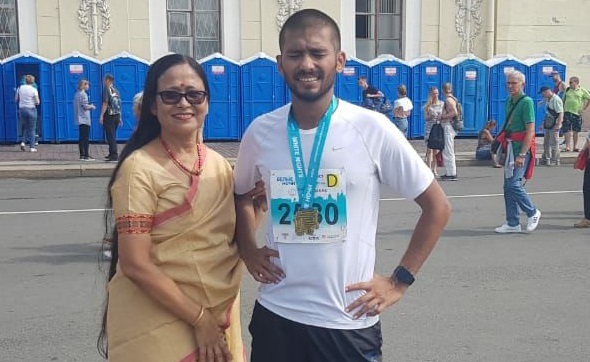 Sagar Rai Deka with his mother Upasana Deka immediately after the successful completion of the full Marathon at St Petersburg on Sunday.

Sagar Rai Deka, a thirty-year-old promising young entrepreneur of Mangaldai who had high professional degrees from reputed institutions abroad and belongs to a very well to do business family of Assam is recently in the news not for any new entrepreneurship and business venture or for academic excellence, but for a rather unmatched  chapter of adventure sports.

Sagar has actually made history by becoming the first sportsman from Assam to take part in the spectacular International Ergo White Nights Marathon at St Petersburg in Russsia on July 22 last.

A total of ten thousand participants from different countries took part in this historic marathon during the White Nights in St Petersburg.

Before joining the race in Russia, Sagar already had the reputation of successfully finishing the 42 km Ladakh full Marathon organized at Leh, the capital of Ladakh on September 10 last year.

The ‘Ladakh Marathon’ at a height of 11,500 feet is known as one of the highest marathon in the world.

Marathon has turned out to be a passion for this young energetic entrepreneur who hardly misses any marathon events in the State and every time he has the reputation of finishing at ease.

However he is not at all crazy about winning prizes.

“When I was in school and college, I used to take too much junk foods which led me to become over weight. I could get out of it only when I started to practice running, gradually it turned out to be my hobby and then my passion,” shared Sagar before leaving to Russia from his home town Mangaldai.

It may be mentioned that Sagar Rai Deka, a grandson of legendary business tycoon Sunanda Ram Deka – the founder of SRD Group of Companies, who after completion of his primary education from Rupkonwar Jyoti Prasad School, Mangaldai had joined the Scindia Schools in Gwalior and later completed his degree from Hindu College, New Delhi.

Later, he joined three premier universities namely University of Amsterdam, EDHEC Business School in France and Rotterdam School of Management in Netherlands where he pursued higher studies in Business and Management.

Though he served in couple of reputed business organizations abroad and enjoyed high earnings, he was not satisfied and raring to come to his home state and help his father Mukul Ch Deka and his other family members to run their ancestral business venture – the SRD Group of Companies.

His innovative new business idea could easily be visible in the SRD Group when they successfully entered into the entertainment and restaurants business with high quality laser technology  run cinemax – ‘Dream Theatre’ and the highly attractive restaurant ‘Khar-Khowa’ to their credit.

Sagar’s parents Mukul Chandra Deka and Upasana Deka who always happened to be the source of inspiration for all his ventures, did not leave Sagar alone and flew with him to St Petersburg and boosted him to achieve his goal.