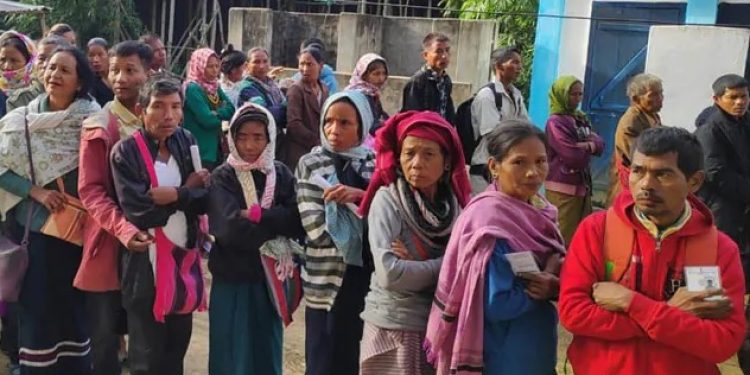 Voting is underway in Mizoram, and as per latest reports, polling is going on smoothly with 15 per cent polling recorded during the first two hours since voting began at 7 am in the morning on Wednesday.

Mizoram is the only state in the Northeast where the Bharatiya Janata Party (BJP) has no presence and the saffron party is is aiming to wrest control from the Congress which has been ruling the state.

The State is seen by the BJP as the ‘final frontier’ in the north-eastern region as it is in power in all other states of the region – either by winning polls or forging alliance with regional parties.

Polling in the 40-member Legislative Assembly of the hill state will decide the fate of 209 candidates. The BJP – which has never won an Assembly election in Mizoram – is contesting in 39 seats.

Of the 209 candidates in the fray in Mizoram, only 15 are women. During the last Assembly elections in 2013, only six women had contested and none could win.

I request my sisters and brothers of Mizoram, particularly the dynamic youth of the state, to turnout in large numbers and vote.

Prime Minister Modi took to Twitter and tweeted on his official handle:

‘I request my sisters and brothers of Mizoram, particularly the dynamic youth of the state, to turnout in large numbers and vote.’

Meanwhile, the Bru refugees have started arriving at Kanhmun village in Mamit district of Mizoram, where 15 temporary polling stations have been set up to facilitate their right to exercise their franchise.

Notably, over 12,000 Bru refugees are living in six relief camps in Tripura.

The counting of votes for Mizoram will take place on December 11, along with Madhya Pradesh, Rajasthan, Chhattisgarh and Telangana, where Assembly elections are also being held.