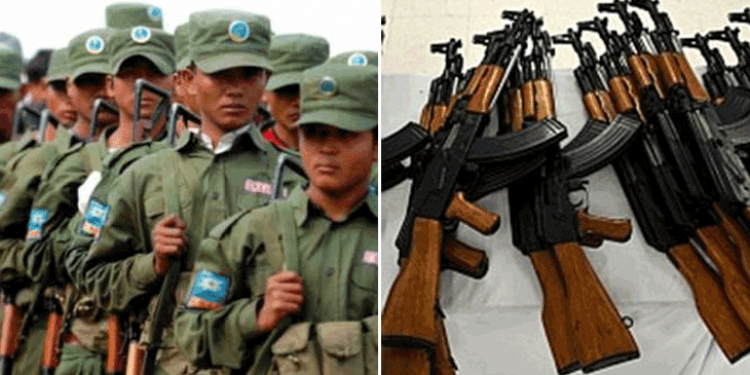 The United Wa State Army (UWSA), the ethnic militia in Upper Burma, continues to be the “main supplier” of sophisticated arms to the guerillas in Northeast India, including the ULFA.

Surrender of seven hardcore ULFA cadres on March 18 in Upper Assam’s Tinsukia district has made it clear that the UWSA is still supplying arms and ammunition to the insurgent outfits of northeast.

The seven-member ULFA unit was being lead by ‘sergeant’ Barun Asom, when they were intercepted by the security forces along the international border. Later, they surrendered in presence of Tinsukia superintendent of police Shiladitya Chetia.

‘Sergeant’ Barun Asom and his boys gave some detail on as to how ULFA has been procuring arms from the UWSA.

Moreover, the factory marks on the arms and ammunition surrendered by the ULFA cadres gave a better picture of UWSA’s involvement in arming the insurgent outfits of northeast.

All the weapons surrendered by the seven ULFA cadres, had specific marks of the manufacturers, which clearly indicated the involvement of UWSA.

AK 81 assault was introduced into PLA service in 1981, and its first combat use came during the Sino-Vietnamese border conflicts of the mid-1980s. Now, the PLA has replaced most of its Type-81s with the Type 95 series of weapons.

Though Type 81 rifles are still in service in the reserves and armed police in China, the UWSA now manufactures weapons with an “informal franchise” agreement with the Chinese ordnance factories.

The main motive is to sell these weapons at a premium to the insurgent outfits in northeast. The arms manufacturing unit in the Wa state are supported by the Chinese factories in Yunnan.

Similarly, German arms manufacturer Heckler & Koch no longer sell weapons to countries which are corrupt, undemocratic, or not affiliated in some way to NATO. The German company supplying arms to insurgents in northeast does not arise as it supplies only to countries on its “green” list.

It has been reported that the UWSA has set up a weapon manufacturing unit near Pangshang to produce replica Heckler & Koch assault rifles.