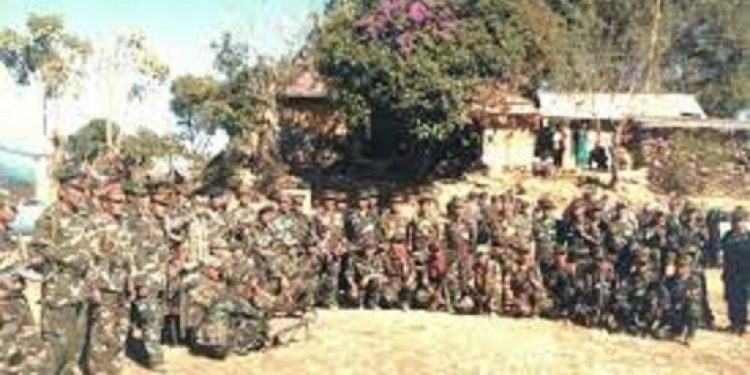 The NSCN (K), whose fighters attacked security forces recently with a string of ambushes in areas bordering Myanmar, has reportedly bought a large consignment of weapons.

From Monywa, the weapons were taken to Sinkaling Hkamti and then to the rebel bases in Taga .

The size of the consignment was not yet clear but intelligence sources estimate at least 150 automatic rifles and some other automatic weapons with an appropriate assortment of ammunition reached the NSCN (K).

Whether they purchased the entire consignment or was it shared between the constituents of the rebel coalition UNLFSWEA is not clear.

The sources say it is possible that a part of the consignment was picked up by the ULFA (Independent) led by Paresh Barua.

The weapons of Chinese design were reportedly manufactured in an arms factory in Pangwa in the Kachin state.

The factory is said to be run by one Zakhung Ting Ying, a former Burmese Communist Party commander.

Ting Ying surrendered to the Burmese army Tatmadaw in 1989 and set up his own militia and his arms assembling factory. Since then, Ting Ying has controlled the Pangwa region after surviving a putsch in 2005 by a group of NDA-K dissidents who accused their leader of involvement in rampant drug-running.

Ting Ying, according to Kachin sources, is protected by a bodyguard corps made up exclusively of Chinese mercenaries.

The gang, said to be a few hundred, is led by Zhao Ra, a Chinese-born adopted son of Ting Ying.

In 2009, the NDA-K was converted into a Border Guard Force (BGF) by the military under an arrangement that sought to co-opt many of the ethnic armies into the official fold.

That has helped strengthen NDA-K’s domination over Special Region no.1 as a government-sponsored militia.

A 2014 report released by the Kachin Women’s Association of Thailand (KWAT) alleged that the BGF units (1001 to 1004) comprised ex-NDAK cadres under Zakhung Ting Ying and they were actively involved in the opium trade across Special Region no.1 in Chipwe, Sadung and Tsawlaw townships.

The report, titled “Silent Offensive” alleges that the NDA-K was being allowed to grow opium “in exchange for fighting against” the Kachin Independence Army (KIA). The KIA has been engaged in a prolonged armed conflict with the Myanmarese military since June 2011.

Ting Ying controls a large molybdenum mine located in the NDA-K territory and oversees extensive logging in the area.

Wikileaks has published a 2005 United States embassy cable in which American diplomats described the NDA-K as a group that “resembles nothing more than a tightly-controlled business cartel.”

In 2010, Zakhung Ting Ying was elected to the Upper House of Myanmar Parliament in 2010.

His son Zakhung Ying Sau currently represents the same area in Kachin state parliament. Ting Ying’s political rise is a reward as well as an acknowledgement of his supremacy and loyalty to the military in the region.

So far, the United Wa State Army (UWSA) was known to be assembling weapons on Chinese designs in their factories.

That Ting Ying has now got into the business in Kachin state should worry Indian security planners because much of Ying’s assembled weapons was likely to find its way to Northeastern rebel groups because of the proximity of the factory to the Taga base area.

This also exemplifies the lack of effort on part of the Burmese army to check the rebel activity, despite their repeated promises not to allow their soil to be used for anti-Indian activities.