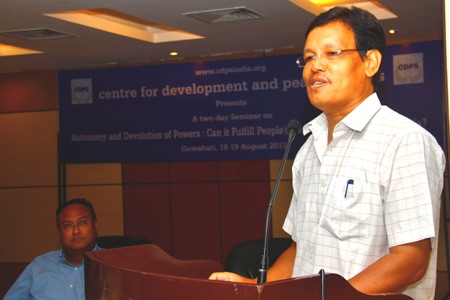 The last meeting of the Central Working Committee of the United People’s Party Liberal (UPPL) of the current session 2015-18 was held recently at Bonorgaon in Kokrajhar district under the chairmanship of its president and former Rajya Sabha MP, Urkhao Gwra Brahma.

The CWC in the meeting condoled the demise of the departed souls of the members, workers and supporters of the party who have lost their lives for the greater interest of the society in various situations and times.

The meeting resolved to make it mandatory for each and every district committee of the UPPL to send at least 200 delegates to the conference to be held at Bonorgaon on October 1 and 2, 2018.

The party has a total of 10 district committees and at least 2000 strong delegates are participating in the conference from various parts of BTAD area and outside.

“The meeting resolved to appoint Rabiram Uzir, Somnath Narzary and Milon Moshahary as members of media cell to carry out publicity activities in various media about the proposed triennial conference of the party till the end of the same,” stated UG Brahma, president, UPPL.

Brahma also informed, “The meeting also resolved to convene the last PMB meeting of current session (2015-2018) of the UPPL at Kajalgaon on September 23, 2018 to discuss about some strategies in connection with the making conference a grand as well as the forthcoming Lok Sabha election.”

The meeting resolved to hold a special convention of the Scheduled Caste (SC) Cell of the UPPL at Bijni on September 22, 2018.

The meeting resolved to meet State Coordinator of NRC to appraise the prevailing situation in the area after the final draft NRC publication.

The meeting also expressed deep concern about missing of a large number of names of genuine Indian citizen in the final draft list of NRC.

At the same time the meeting also urged the NRC authority not to harass any Indian citizen in the name of NRC update and also make all possible initiative to ensure that no any illegal names are included in the NRC.
The meeting also expressed grave concern over the some incidences of harassment meted out in the district of Baksa over UPPL worker in recent days. During the meeting, the district administration was also appealed to look into the matter.

The meeting further discussed about the end of the term of the current session of the UPPL, 2015-18, formation of a new body of the CWC and portfolios to be given in the forthcoming conference.