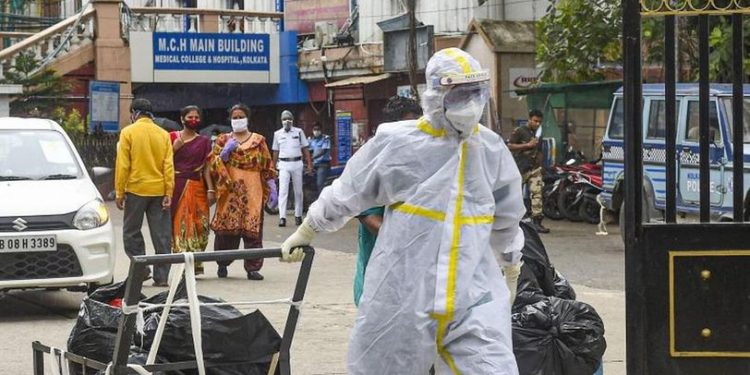 Two persons lost their lives on the premises of a state-run hospital in Kolkata on Monday after being made to wait for a long time before being admitted inside for treatment.

As per reports on Tuesday, the families of the two patients alleged that the doctors of KMCH were late in attending to them due to which they had died.

However, the hospital authorities denied the charges and claimed that the two patients had died earlier before being brought there for treatment.

One of the patients, a 28-year-old man Ashok Ruidash hailing from Jaynagar in South 24 Parganas district, who was suffering from typhoid was brought to KMCH after two other hospitals had allegedly refused to admit him for treatment.

Ruidash’s cousin claimed that he was under treatment for typhoid at a private hospital in Barasat and was not suffering from COVID-19 but still had to go looking for treatment at various hospitals.

“He was not a Covid-19 patient. Two hospitals refused him admission and then we brought him here (KMCH. Even at the KMCH, he was made to wait for long and by the time the doctors came he already died,” he added.

The second patient who had died was an elderly woman hailing from Baharampur in West Bengal’s Murshidabad district.

The lady, who was suffering from body ache and swollen feet, succumbed inside the van in which she was brought to the KMCH by her daughter.

“We don’t know if she was suffering from COVID-19, as she was never tested for the disease,” her daughter said.