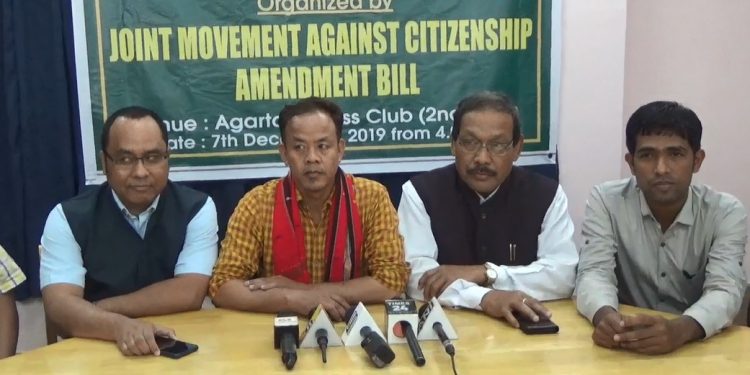 JMCAB has demanded Tripura’s complete exemption from the ambit of the CAB.

The Joint Movement against Citizenship Amendment Bill (JMCAB) on Saturday announced an indefinite Tripura bandh from December 9 in protest against the Citizenship (Amendment) Bill (CAB).

JMCAB is an umbrella organisation of tribal parties and indigenous social organisations, which was floated to oppose the CAB.

The JMCAB has demanded Tripura’s complete exemption from the ambit of the CAB.

JMCAB convenor Anthony Debbarma told reporters in Agartala that the protest would be held across Tripura, through methods such as road blockade and rail blockade.

Emergency supplies would be excluded from the ambit of strike, he said.

INPT general secretary and senior leader of the agitating forum, Jagadish Debbarma, said they aren’t satisfied with the Centre exempting areas under Inner Line Permit (ILP) and 6th Schedule areas from the CAB.

He said that Tripura tribals are already in minority in their own state. Even if the 6th Schedule areas are exempted, accepting more non-tribals will only lead to a crisis of existence for the indigenous tribals.

“We shall protest the Bill and observe an indefinite strike across Tripura from December 9,” Jagadish said.

The IPFT has given a 12-hour TTAADC strike call on December 9.

IPFT general secretary Mangal Debbarma said in a press conference on Saturday they don’t agree with the Centre’s CAB formula.