Condemning the rally of Roy Barman, thousands of women on Thursday hit the streets in Agartala 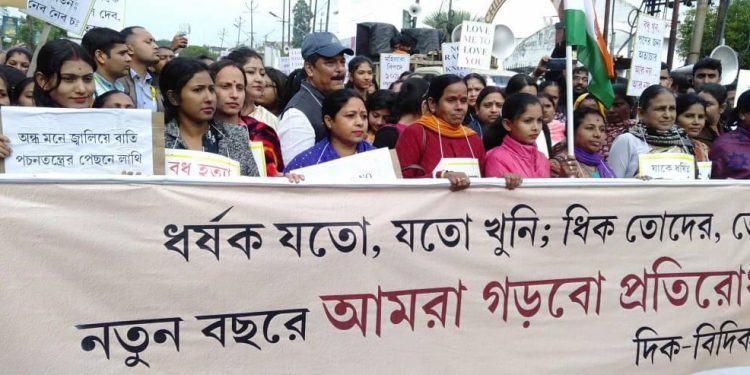 Braving freezing cold and rain, thousands of people participated in an ‘apolitical’ march against crimes on women in Agartala on Friday.

The protest march, organised at the initiative of BJP MLA and former Tripura health minister Sudip Roy Barman, saw the participation of a large number of women and youths from across the state.

Asish Saha, a BJP MLA and a close aid of Sudip Roy Barman, was also present at the rally.

The protest march began from Rabindra Bhavan and concluded at the same venue after marching up to RMS Chouwmuhani area of the city.

The protesters shouted slogans and held placards with messages like ‘Love me to love you’, ‘Where the mind is without fear’.

Speaking to reporters Sudip Roy Barman said, “In last 16 years 4 lakh 60 thousand women were raped in the country. Is this figure not enough to organize a rally against crime on woman?”

Roy Barman said that the protest rally was purely apolitical one and there is nothing to do with against the government.

“We have organised this rally to ensure safety of our daughters and sisters,” he added.

Condemning the rally of Roy Barman, thousands of women on Thursday hit the streets in Agartala.

The rally was called by Soma Majumder, who was tied to a pole and assaulted by some men in full public view in 2014 for protesting against some youths who had forced her husband Nirmal to drink liquor during Durga Puja immersion.