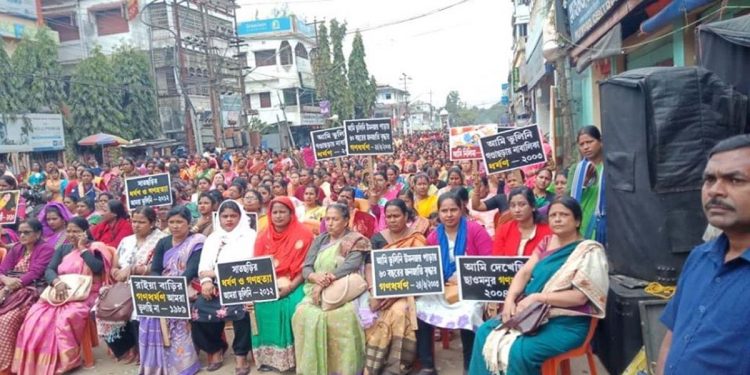 Thousands of BJP activists, mostly women took to the streets in Agartala on Thursday in protest against rebel BJP leader and former minister Sudip Roy Barman’s call to organize a rally on March 3.

Sudip Roy Barman has called for an “apolitical protest rally” to protest against increasing crimes against women in Tripura.

Thursday’s protest rally, backed by the state BJP and BJP Mahila Morcha, was called by BJP leader Soma Majumder, who was tortured by some anti-social elements in 2014 when Sudip Roy Barman was an MLA.

Soma Majumder was tied to a pole and assaulted in public by a group of people, mostly women, in the Tata Kalibari incident in 2014.

In the case, a total of 7 people, including 3 women, were sentenced to rigorous imprisonment.

Recalling her terrific experience, Majumder said then Congress MLA Sudip Roy Barman had suggested her to reconcile with the culprits.

As Sudip Roy Barman announced to organize a rally against the increasing incidents of crime against women in Tripura, the state BJP leaders were under pressure.

Rattled by Sudip Roy Barman’s move, the State BJP on Thursday organized a procession and had a meeting at Paradise Chaumuhuni as a show of women’s strength.

A large number of women of all ages were brought in vehicles from different parts of the state, mainly West Tripura and Sepahijala districts.

The women walked in a procession shouting slogans, reminding those who cared to hear the past incidents of crimes against women and questioning the silence of leaders during the Congress-TUJS and Left regime.

Even though there was no direct reference to Sudip Roy Barman, insinuations galore were explicit enough to signal who they were aiming at.

Soma Majumder said, “Now in Tripura, the women are safe. Some leaders are trying to tarnish the good image of the state government and that is the reason why they are calling for rally in the name of protesting crimes against women.”