As many as 10,323 school teachers in Tripura engaged on ad hoc basis post the termination of their contracts were terminated due to “unconstitutional” recruitment rules of the previous left front government 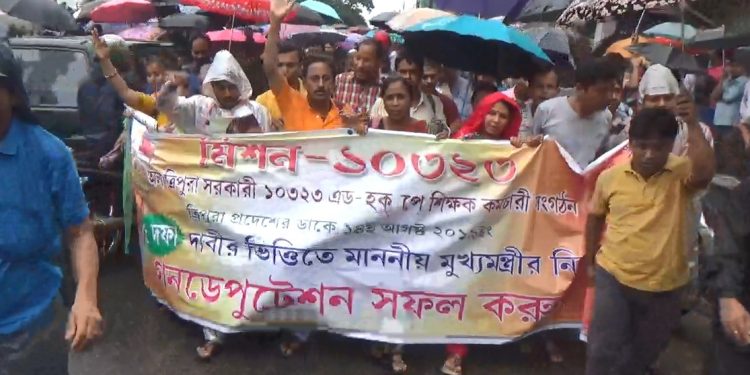 Tripura teachers who have been dismissed from their jobs according to an SC order hit the streets in large numbers on Wednesday in a bid to protect their jobs.

The agitation was led by the All Tripura Government 10323 Ad-hoc Teachers Association (ATGATA).

As many as 10,323 school teachers in Tripura engaged on ad hoc basis post the termination of their contracts were terminated due to “unconstitutional” recruitment rules of the previous left front government.

Protesting against the decision the teachers on Wednesday organised a protest march, which culminated in front of the circuit house after passing through various points and corners of Agartala.

The agitating teachers later, when wanted to meet the CM Biplab Kumar Deb and submit a five-point charter of demands, were, however, denied permission by the CMO.

ATGATA leader Bimal Saha said that they won’t leave the road until the CM did not give them permission for the meeting.

Saha further informed that they would file a case at the High Court in their support as it was the fault of recruitment policy.

“Why will the teachers suffer because of it?” Saha asked.

Most of the students have already completed a decade in service, however, they are yet deprived of various benefits.

The 10323 teachers were recruited by the then Left government from 2010 to 2014, which was challenged at the Tripura High Court.

The teachers were terminated as per the Tripura High Court’s verdict of 2014 and the court fixed March 29, 2017, as the last date in office for the teachers; which was extended till December 30, 2017, by the court on ‘humanitarian grounds’.

When the then CPI (M) government repealed in Supreme Court to extend their jobs for 1 year, the court decided to extend it for six more months.

During the last assembly election campaign in Tripura, the BJP promised to solve the matter and assured that every teacher will continue their job.

After forming the government in Tripura they also appealed in Supreme Court to extend the teachers jobs for two more years till June 30, 2010.

Looking at the teachers’ crisis in the state, the Supreme Court decided to extend it for 17 more months thereby making March 30, 2020, as their last day in office.

The teachers, hence, protesting against this deadline and demanding the regularisation of their jobs hit the streets.