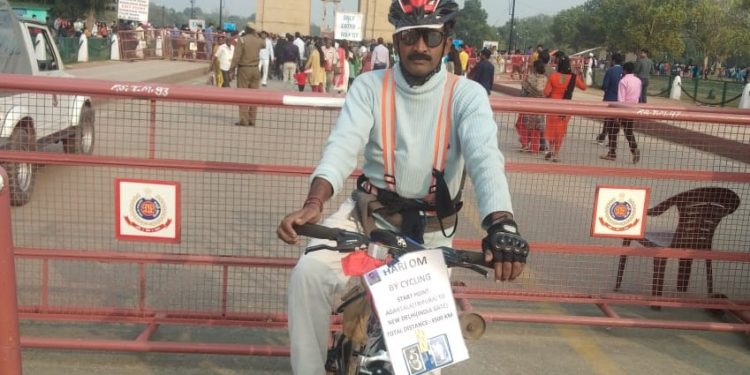 Bikash Das, a 49 years old man from Tripura has achieved a new feat – went to Delhi on a bicycle.

He came back from Delhi to Agartala on Wednesday night.

Bikash is a rifleman of Tripura State Rifles (TSR) 6th battalion. He has been working as a rifleman since last 29 years.

And cycling is his hobby.

He is a resident of Bankumari of Agartala.

Bikash told that earlier he took part in bicycle expedition in the state several times.

He went to several places in Tripura cycling.

He has a group whose passion is paddling around.

With his group he went to several places in Tripura in cycles.

But this is the first time that he went cycling outside his State.

He started his journey on February 11 last and reached India Gate in New Delhi on March 1 last.

In 20 days he crossed more than 3500 kilometres and crossed Assam, West Bengal, Bihar, Uttarpradesh and Haryana.

During nights, he stayed at road side dhaba or police station.

He met lots of people during his 20 days journey.

Bikash said, in present time, the people are losing the habit of hard work.

He wants to set an example before them.

And also wants to tell them what are the benefits of physical fitness.

That’s why he went to Delhi from Agartala by bicycle.

Bikash told that, he was very much impressed with the Prime Minister Narendra Modi’s Fit India movement.

On March 2 he started for Agartala from Delhi by train and on Wednesday night he came back to the city with lots of memories.