Exact reason as to why the rally was cancelled, however, is not yet known 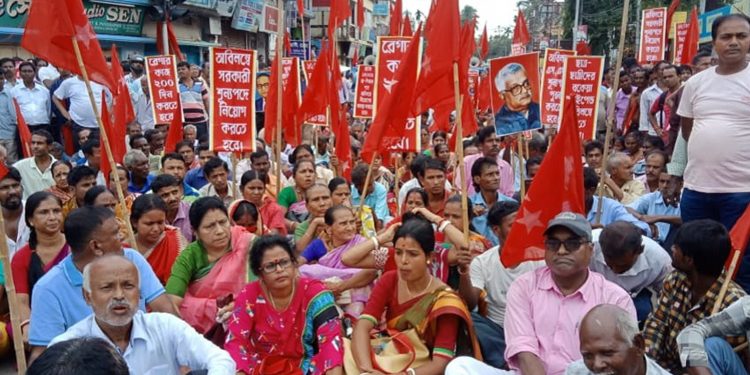 CPI (M) supporters demonstrating on the streets after the police cancelled the rally. Image: Northeast Now

The left party was scheduled to meet the state Governor Ramesh Bais and put forward before him a nine-point charter of demands.

The party had availed the required no-objection-certificate a week earlier for holding the rally.

The decision to cancel the rally at the last moment has been severely criticised by the opposition.

The exact reason as to why the rally was cancelled, however, is not yet known.

Slamming the BJP-led state government, the CPI (M) leaders said, “The BJP is afraid of us and so they have now begun cancelling rallies by the opposition.”

“Such moves won’t stop us and every time the BJP will try to stop us, we will come back stronger,” said CPI (M) MLA Sudhan Das.

“Police permission for the rally was obtained much earlier as the rally was announced a month back,” said CPI (M) MLA Ratan Bhowmik.

“In fact, the police were informed about the rally twice after that and as per their advice we even change the route of the rally,” Bhowmik further added.

The last moment cancellation of the rally left the CPI (M) supporters red-faced and they were forced to stage a protest on the street itself.