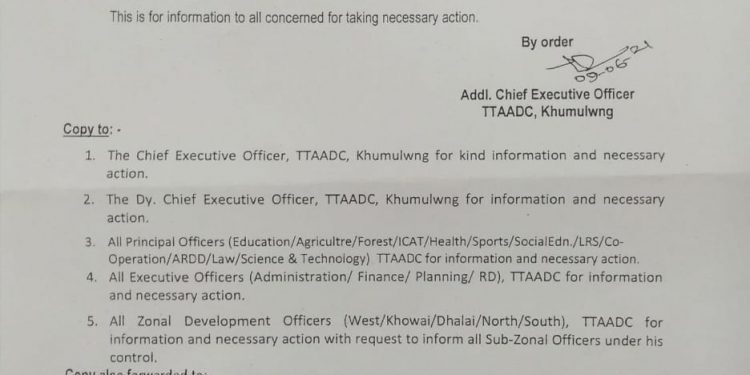 The Tripura Tribal Areas Autonomous District Council’s (TTAADC) newly elected body has decided to accept any communiqué made by government offices in Kokborok to popularize the language and make communication easier between government officials and the indigenous people.

The additional chief executive officer of the TTAADC, Khumulwng issued a memorandum on June 9 stating that Kokborok was declared as an official language of Tripura with effect from January 19, 1979, through Tripura Gazette notification.

The memorandum was made public on Wednesday.

“In order to popularize Kokborok as an official language and for better communication between TTAADC administration and people, any application written in Kokborok must be entertained by all offices in TTAADC,” the memorandum stated.

“Within 100 days we have ensured that Kokborok can be used for official communication by the government in the council. We are trying our best to change a system that has been insensitive to our sentiments. 1st step was to write the Council Bhawan in Kok Borok… more will follow,” Deb Barma tweeted.

The TTAADC administration earlier changed the inscription of the Council Bhawan (Kok Chap Nok) from Bengali to English.

Earlier, Deb Barman had announced to donate his one-year salary to fight the novel coronavirus and use the fund for other developmental work.

TIPRA and Indigenous National Party of Twipra (INPT) recorded a landslide victory in the tribal council election held recently, winning 18 of the 28 seats for the 30-member council.